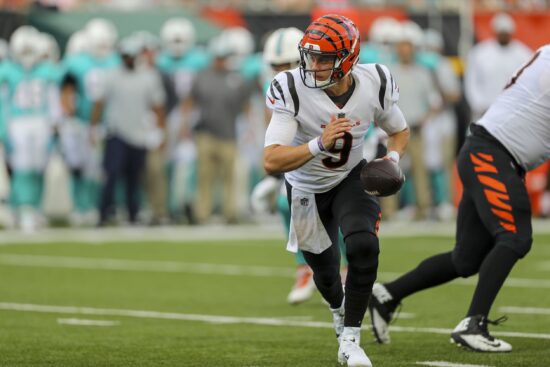 The Cincinnati Bengals are hopeful they can improve on their 2020 record (4-11-1) now that their sophomore quarterback Joe Burrow is injury-free. Last year’s first overall draft pick spent the final third of his rookie season off the field due to a knee injury.

Burrow is back, but there are some big changes in the Bengals roster. In the 2021 season, they will be without one of the best receivers in franchise history. A. J. Green is now in Arizona, so the Bengals are putting their hopes in their rookie wide receiver, Ja’Marr Chase.

They also have plenty of new faces in the defensive team, meant to help them do better than the last year when this team conceded a total of 424 points. Not too bad you might think, but this season, they will need to do even better, as their 2021 schedule pits them against some really good offenses.

From 2011 to 2020, wide receiver A. J. Green engraved his name in the Bengals’ history. He got himself in the second spot in the all-time list of Cincinnati’s leaders in total receptions, receiving yards, and receiving TDs. However, in 2021, he’s no longer a Bengal. Instead, he’s now playing for the Arizona Cardinals.

Green’s departure created a huge hole in the Bengals’ offense, which their management decided to fill by picking a wide receiver in the 2021 NFL Draft. Ja’Marr Chase was their first-round pick (fifth overall), an LSU product who won the Fred Biletnikoff Award (best receiver in college football) in 2019.

Their second-round pick was another member of the offensive team. The man in question is Jackson Carman, a tackle who played college football at Clemson. Their pick in the third round, as well as two selections in the fourth round, were all defensive players – Joseph Ossai (DE), Cameron Sample (DE), and Tyler Shelvin (DT).

They also made a few big-money signings to strengthen their defense even more. Ex-Saints DE, Trey Hendrickson signed on a 4-year $60m contract. Mike Hilton (CB) moved from the Steelers, also on a 4-year contract. Chidobe Awuzie was another CB to join the Bengals; he arrived from Dallas on a 3-year contract.

The 2019 Heisman Trophy winner joined the Bengals as the first overall pick of the 2020 Draft. There were great expectations about the rookie quarterback last season, but an injury stopped him from doing much.

However, before picking up the season-ending injury, Burrow did play ten games. We saw him completing 264 of his 404 passes for 5,688 yards and 13 passing touchdowns. Not too bad, but being one of the legends of college football, Burrow is expected to do much better than that.

Their defense looks really powerful ahead of the start of the 2021 season. The Bengals defensive team from 2020 wasn’t too bad, but now that they’ve made a couple of big signings, they’re expected to do much better.

Defensive end Trey Hendrickson is the biggest star in their defense, but there are plenty of other amazing players on the defensive team. Safety Jessie Bates is one of them, and so are the Bengals rookies Ossai, Sample, and Shelvin.

Joe Burrow will probably do much better than he did in 2020. Unfortunately, he won’t be able to throw his balls to A. J. Green anymore, but this year, we could see rookie Chase emerging as a superstar receiver.

Their running backs – Chris Evans, Joe Mixon, and Samaje Perine – aren’t among the NFL elite. Sure, Burrow can help out as he’s kind of a dual-threat quarterback, but that probably isn’t going to make much difference. Last season, they were 25th in the league in rushing yards, which probably isn’t going to improve much in 2021.

The Cleveland Browns are their biggest rivals. Not only are they divisional foes, but the two teams are both from Ohio. The bad news for the Bengals fans is that the Browns are a much better team this year. They will probably be favored in both of their 2021 matchups, especially in the one happening in Week 18, when the game is played in Cleveland.

However, at home, the Bengals could maybe do well against their biggest nemesis? That game is played in Week 8, just before the Bengals get their bye.

VegasOdds Prediction – Only a Tiny Improvement Expected from the Bengals

The Cincinnati Bengals seem like a better bunch than they were the last season. This goes especially for their defensive team. However, their schedule looks too tough for them to improve their last season’s record significantly.

Ahead of the start of the 2021 NFL season, it seems that there are only a couple of games in which the Bengals are clear favorites, e.g., the games against the Lions and Jets. The trouble is that in both of those games, the Bengals are playing away from home.

As a result, it seems very unlikely that the Bengals will get to the playoffs. In fact, the most likely scenario is that they will finish the 2021 season with the worst record in the AFC North division. But, will they win more games than the last year?

Oddsmakers think so, as their roster looks stronger than in 2020. However, their schedule also looks much tougher. That said, our prediction is that they will finish with fewer than 6.5 wins.