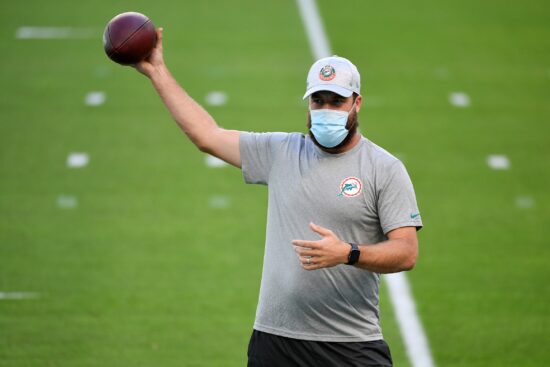 Your team is only as good as your quarterback, but what happens when the face of the franchise is not that good?

Tom Brady just provided the blueprint for teams to follow this off-season. Tampa Bay went from a team mentioned as a turnover factory due to its quarterback play to having the greatest quarterback in NFL History lead the franchise to its second Super Bowl title. That’s what the dynamic of the quarterback position can do for a franchise. Your signal-caller is the most critical position on the roster.

The Rams, not too long removed from a Superbowl themselves, decided it was time to move on from Jared Goff and take a chance on Lions star quarterback Matthew Stafford.

The QB position can make or break a franchise – look at the Colts! The Colts were in prime position to make a deep playoff run until the sudden announcement that Andrew Luck was retiring, leaving them to scramble for a season searching for a new signal-caller. They then kicked the tires on the now-retired Phillip Rivers.

Indy decided this time they would not turn to the draft but do what the Rams did to solidify the quarterback position by trading for disgruntled QB Carson Wentz.

Another trade to keep an eye on is brewing in Houston. Deshaun Watson has demanded a trade from the dysfunctional franchise. He listed his preferred destination as Miami or New York, but the Texans have stated numerous times that they’re not looking to move him at his moment.

That’s a few teams I just listed that will move forward with a new face of the franchise, but those were trades and not free agency.

Free agency will be another deciding factor on how more teams will look starting the 2021 season. The top guy on the list is Dallas Cowboys quarterback Dak Prescott. Dak’s situation is the most fascinating. He’s coming off the franchise tag and a season-ending injury that will play a role in contract negotiations. There have been rumors of the Cowboys wanting Dak to sign a five-year deal, but Dak’s looking for a four-year contract instead. If there is no agreement this offseason, expect Dak to play out the year on a franchise tag and leave the organization the following year.

These NFL organizations saw the benefits of having the right signal-caller behind the center. The Tampa Bay Buccaneers showed precisely how to turn around a franchise in one off-season. They took advantage of the quarterback market and upgraded!

The market will be flooded with quarterbacks this offseason, and I never even mentioned the impressive crop of rookies coming in.

Tyler Butler Greenville South Carolina native Tyler Butler is currently a proud member of the NABJ, and owner of Sports and Culture Sports Media LLC. He’s a husband and father of two daughters. Tyler has a passion for covering all sports and helping to provide the small schools an opportunity to gain exposure. His company is based out of the Greenville area but has recently expanded to Arkansas after covering the Arkansas Women’s Basketball Team. Tyler’s main goal is to help the younger generation understand the importance of journalism and shining a brighter light on women's sports of all ages.