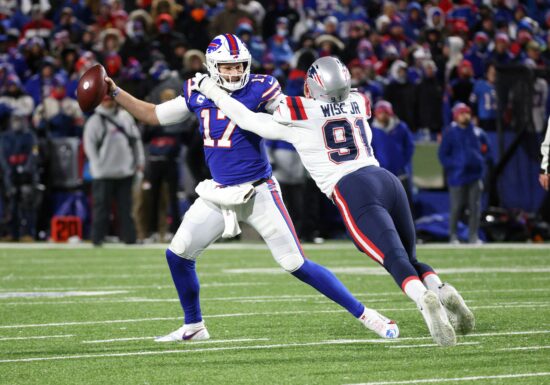 The Bills’ opening night win against the Los Angeles Rams proved why they sit at the top of the win total projections.

Meanwhile, the Bengals are projected just 9.5 wins, 6th in the AFC, after winning the conference last season.

The Bills opened the season with a scorching 31-10 road win against the defending champion Rams. The Bills dominant performance against last year’s league champs is a testament to the level of talent on their roster. The Vegas odds reflect that talent. Buffalo, led by star quarterback Josh Allen, is projected to win a league-leading 11.5 games.

Last season, the Bills finished 11-6, a bit of a down year after finishing 13-3 the previous season. In 2022, the Bills have an opportunity to win a franchise-high 14 games. Road games against the Ravens on October 2, the Chiefs on October 16, and the Bengals on January 2 highlight the remaining toughest tests for Buffalo.

After winning the AFC conference last year, the Bengals are projected to win a very modest 9.5 games this season. It may seem a bit strange for the defending AFC champions to be projected such a low win total. Whether or not they are able to continue their success from last year’s postseason will play a big factor in the Bengals’ ability to repeat as division and conference champions.

Listed above the Bengals in win total in the AFC are the Bills, Chiefs, Ravens, Broncos, and Chargers. Most notably, the Ravens, Broncos, and Chargers all missed the postseason last year. While they should definitely improve, it seems foolish to project them more wins than a Bengals team that returns the dynamic combination of quarterback Joe Burrow and wide receiver JaMarr Chase.

Broncos on the Rise

After acquiring long-time Seattle Seahawks starting quarterback Russell Wilson this offseason, the Broncos are positioned to do very well this year. Denver holds the NFL’s 2nd-longest playoff drought, sitting at 6 consecutive seasons with no postseason appearance. Many expect that to change this year, as Wilson will be supported by a good offensive line and a great defense.

Despite their 7-10 finish last season, the Broncos are projected 10.5 wins, tied for 2nd overall in the AFC conference. The Broncos have two rivals in the AFC West who are also projected 10.5 wins, the Chiefs and Chargers. This division also has the Raiders, who made the playoffs last year at 10-7. Wilson will navigate a tough schedule with high expectations during his first season in Denver.

The Rams got pummeled at home in their opener against the Bills on Thursday. After winning the Super Bowl last season, the Rams were hoping to get off to a fast start, but came up well short. Departures from linebacker Von Miller on defense and wide receiver Odell Beckham Jr. on offense made a visible difference as the Rams struggled on both sides of the ball.

The Steelers open the season with the lowest projected win total among playoff teams from last season. After finishing 9-7-1 in 2021, the Steelers will have a new quarterback at the helm this year. Long-time starter Ben Roethlisberger is headed to retirement. He will be replaced by Mitchell Trubisky, who beat out 2022 1st-round pick Kenny Pickett and backup Mason Rudolph for the starting job.

After a couple of decades of dominance in the AFC North division, the Steelers projected win total of 7.5 has them expected to finish last in the division. The speed of Pittsburgh’s rebuild will depend on just how fast Kenny Pickett can develop into an NFL-ready starting quarterback. Until then, Trubisky and the Steelers are expected to take a step back from last season.