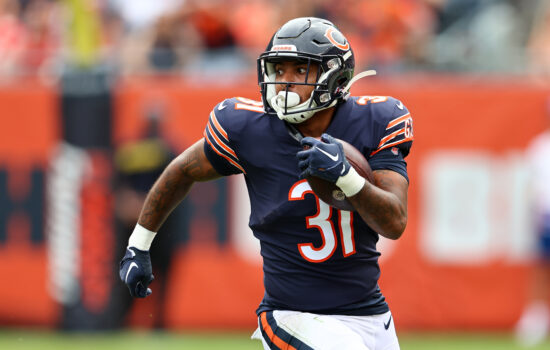 If you’re looking for some NFL Vegas picks for the Bears vs the Seahawks then you’ve come to the right place!

Matt Eberflus started his NFL head-coaching tenure in Chicago pretty well, beating Kansas City Chiefs. It was a preseason game, but still, the taste of a victory on debut boosts the morale.

The Seahawks had an entertaining game in Pittsburgh where they lost to the Steelers, but provided a solid performance in the attack. On the other hand, the defense was terrible.

Trevor Siemian played well against the Chiefs, having two touchdown passes in seven completions and 89 yards. A pretty good ratio, we might say. Though, Siemian isn’t what the Bears want. Justin Fields is their pick for the long run, and the young QB will have to start banging because the entire franchise counts on him.

Fields will have a perfect opportunity to shine against the Seahawks, whose defense isn’t that great. This is a big test for the youngster, who has solid competition for the starting job in Week 1, and we will see his response.

The Bears ran for 137 yards against the Chiefs while allowing only 52 on the other side. Even though they lost several names on the defensive side, they were looking superb against KC, mostly because Jaquan Brisker, the rookie safety, was incredible on his debut.

Start of a Turbulent Period for the Seahawks

Russell Wilson is out, and the Seahawks will have to find another QB. Through the trade with the Broncos, they got Drew Lock. He had 102 passing yards in the loss to the Steelers, 32-25, passing for two touchdowns and making one turnover. Now, the thing with Lock is his inconsistency, as he oscillates a lot.

The Seahawks didn’t have some notable guards even during the Wilson era, and that will only make Lock’s situation even tougher. On the hand, Geno Smith is there as well, but we are pretty sure after years of watching this guy that he isn’t a caliber for a starter.

So the Seahawks’ fans better prepare for lots of frustration and turbulences in the upcoming season. Their favorites will go back and forth, experiencing plenty of adversity.

We like very much what we saw in the Bears’ defense against the Chiefs. Kansas City put in Mahomes and Kelce, for example, meaning that they weren’t going with only backups. Still, Chicago’s defense looked well constantly, not allowing the rivals to get the rhythm, and we are especially impressed with the above-mentioned Brisker. Another rookie, CB Kyler Gordon, might appear in this one, but it isn’t certain. Nevertheless, we will pick the Bears here because we believe that the hosts can’t compete with Chicago’s defense. At the same time, Seattle’s defense is terrible, which is a chance for Fields to show his talent.