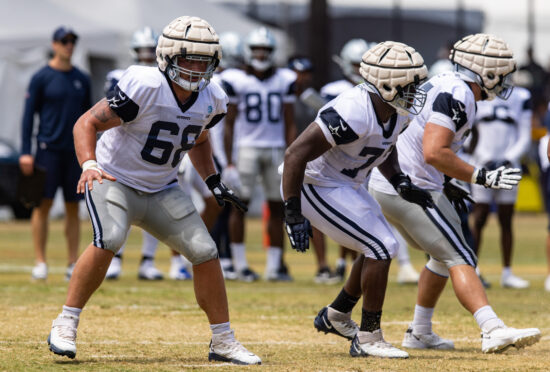 The Broncos did their free agency perfectly, landing Russell Wilson, whereas the Cowboys had one very strange policy this summer, allowing several solid players to leave and not finding the proper replacements.

The fans are not happy at all, which can’t be said for those in Denver, who can’t wait for the season to start.

So the fans in Texas expected to see an all-in approach from the management, but what they got, in the end, was nowhere near their plans and ambitions. Apart from Anthony Barr, the veteran linebacker and defensive end Dante Fowler, this team didn’t land any notable names during the free agency, losing several solid pieces on the other end.

Amari Cooper, Cedrick Wilson Jr, Randy Gregory, Blake Jarwin, all these guys are gone, and despite the Cowboys having tons of superstars on the roster, it appears that they have a weaker team than during the previous year. They are still a playoff contender and possibly the biggest favorites for winning the division, but nothing more than that.

We don’t expect to see Dak Prescott immediately in the first game, but knowing Mike McCarthy and his weird approach, it wouldn’t be odd to witness something like that. Elliott could get a few reps, as well as some of the guys from the defensive line.

Russell Wilson’s arrival in Denver is the main story in Colorado. Despite Nikola Jokic’s back-to-back NBA MVP awards, we feel that all the town’s eyes are pointed towards Russ. After 11 starting quarterbacks since the last Super Bowl ring, the Broncos finally have a proper one, who could lead them all the way.

The new head coach, Nathaniel Hackett, will immediately start to test his offense and create chemistry on the field. He is one of the most talented and creative guys in the league regarding the offense, so expect to see enjoyable football when the Broncos play.

We can’t wait to see TE Greg Dulcic, the third-round pick coming from UCLA. For many, he has the ability to become a steal of the draft, and a huge contributor right away.

Mile High is always unpleasant, especially during the preseason, when players still feel the consequences of training camps and all the physical preparations. This and the fact that the Broncos fans are euphoric over Wilson’s arrival are two of the biggest reasons why we bet on the home team’s success in this event. We can’t say who is going to play and who will skip the event, yet these two factors prevailed in the end.