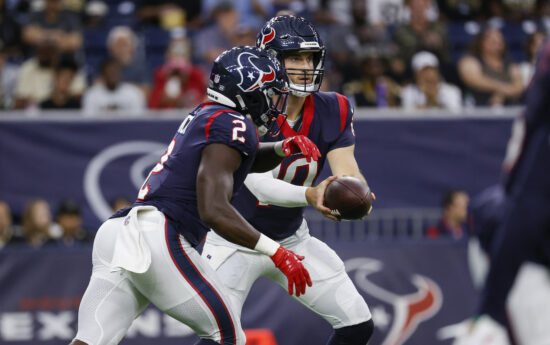 If you’re looking for some NFL Las Vegas picks on for the Texans against the LA Rams then you’ve come to the right place!

The Texans started the NFL preseason with a win over the New Orleans Saints, and that’s a solid swing for this unit.

The franchise from Texas now has an even bigger challenge, the reigning Super Bowl champs, which could bring in some of the starters.

The Rams also had success in the opening round of the preseason, winning against the local rivals, the Chargers.

Driskel and Mills Competing for the Job

Jeff Driskel doesn’t like hearing the stories about him being the backup QB in the first round of the upcoming NFL season. He had mistakes against the Saints, throwing for three picks, but two TDs and 165 yards. Meanwhile, Davis Mills had 14 passing yards, 3/3, but didn’t earn the chance to stay on the field.

Jalen Camp was excellent with 53 receiving yards in two catches, one of them was 49 yards long, and that was probably the best offensive play for the Texans in this one.

The defense had its moments as well. They limited the Saints to only 13 points, which is a solid thing even though Ian Book played the quarterback for New Orleans most of the time, with Andy Alton just popping by for a few snaps. The Texans had five sacks and took three possessions – two by recovered fumbles and one by pick.

Bryce Perkins threw 133 yards, 10/17 for two touchdowns, and without any turnovers. He would rush for 39 yards, on eight carries and add a score while carrying a football into the endzone.

There are some indications that Sean McVay could use the QB until the rest of the preseason because he looked great. John Wolford is in the mix as well, but Perkins was awesome against the Chargers, and he will probably start against the Texans.

Matt Stafford is still out due to an elbow injury, and the Rams are in limbo when it comes to his status. They aren’t too concerned about it, yet we see that McVay isn’t very pleased with how things develop. Several of the Rams’ other starters are injured as well – WR Van Jefferson, WR Brandon Powell, so we might see Cooper Kupp and Allen Robinson on the field for a few snaps.

Texans played well in the opening game of the preseason, and so were the Rams. If the rumors are true and some of the Rams’ stars get out on the field, the Super Bowl champions are easily going to win this clash. Especially because Perkins performed well against the Chargers, and his morale is very high. With his rushing abilities, the Rams looked diverse in the offense, as he often used the space down the field after splitting the defense with pump fakes. We are picking the Rams to win in this one, due to all the above-mentioned, plus the home-field edge.