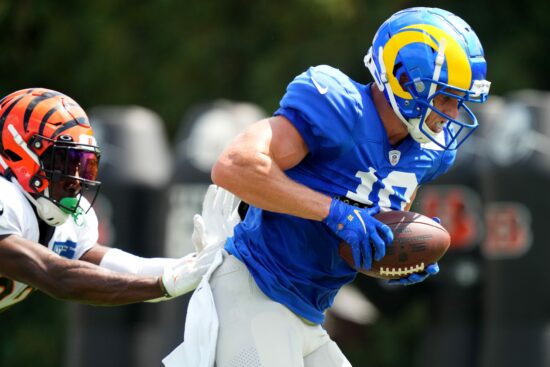 If you’re looking for some of the best NFL Week 1 predictions, you’ve certainly come to the right place!

The NFL season is officially upon us. With the first game just days away, there are some great-looking bets to consider for Week 1.

The 49ers have a new starting quarterback this season. The 2021 NFL Draft’s 3rd overall pick, Trey Lance, is expected to take over as the starter for Jimmy Garoppolo after learning behind him for the entirety of his rookie season. Previously, during the summer, Lance spent a notable amount of time practicing and hanging out with wide receiver Brandon Aiyuk. In his 3rd year, Aiyuk is considered to be a potential breakout candidate this season, and his chemistry with Trey Lance is a good indication.

The 49ers take on the Bears in Chicago for their first game of the season. This will be a relatively tough first test for an inexperienced Lance, so Vegas is playing it safe with their projections for the 49ers passing and receiving numbers. This anxiousness about Lance’s readiness may have created some big opportunities. I project Aiyuk to catch 5 balls for 68 yards and a TD in this game, making me feel confident in his ability to hit the over of just 48.5 yards.

After 14 seasons with the Seahawks, Russel Wilson was traded to the Denver Broncos this offseason. To open the season, Wilson will return to Seattle for an opportunity to beat his former team. As a result, many people have pegged this as a huge game for Wilson. The Broncos are expected to be the better team of the two this year. They have a strong offensive line and some key weapons such as wide receivers Courtland Sutton and Jerry Jeudy.

Although I believe Wilson will play well and lead the Broncos to a victory, I don’t think he’s going to be throwing a gauntlet of passes. Denver has a dynamic duo of running backs, featuring second-year back Javonte Williams and veteran Melvin Gordon.

If the Broncos get ahead early, they’ll likely lean heavily on the running game with a defense that is more than capable of holding the lead. I see Wilson completing 17 of 24 passes for 305 yards and a trio of touchdowns, well short of 24.5 completions.

Another quarterback who will be playing an opener against his former team is Baker Mayfield. Though the game is in Carolina, and Mayfield won’t be returning to Cleveland quite yet, this is still considered by many to be a potential revenge game for Mayfield. Unlike Wilson, who left Seattle in a mutually acceptable agreement, Mayfield was treated unfairly by the Browns during their pursuit of Deshaun Watson. The Browns lost Watson to an 11-game suspension and are expected to start Jacoby Brissett in this game.

Mayfield is sure to have high emotions in this game, which could either motivate him or get the best of him. In a position where he’s especially motivated to gain the extra yard or extra point on his opponent, Mayfield is likely to use his legs often. Last year, Mayfield rushed for 8 or more yards in 8 of 14 games played. I think he’ll scramble for over 20 yards in this one, definitely more than the 7.5 rushing yards that he’s projected.

Josh Allen is considered one of the favorites to win the NFL’s MVP award this season. He’ll get a huge matchup in week one, traveling to Los Angeles to face the defending Super Bowl champion Rams. The Rams’ defense is stacked, led by lineman Aaron Donald and cornerback Jalen Ramsey. Certainly, a road matchup against the defending champs and one of the best defenses in the NFL will be the perfect test for Josh Allen and the Bills to start the season.

Despite the toughness of the Rams’ defense, this game is likely to wind up as a high-scoring matchup. In NFL games with two really good teams led by great quarterbacks, it usually turns into a shootout by the time the game ends. Allen threw for more than 275 yards only 6 times last season, but I project him to go 24 for 32 for 355 yards and 3 TD’s in this matchup with the Rams, blowing past the projected number of 274.5 yards.

Another great bet in the Broncos vs Seahawks game features 2nd-year running back Javonte Williams. After a really strong rookie season, Williams is expecting to be the Broncos’ featured running back this season. While he may lose some touches to veteran Melvin Gordon, he’s likely to have a continued presence in the passing game, making him a lock to be a staple in the Broncos offense.

Last year, Williams gained 13 or more receiving yards in 8 of 17 games. With his role only expected to expand this season, I expect Williams to hit that mark in closer to 12-14 of his games this year. In Week 1, against a rebuilding Seahawks defense, I see Williams pulling in 4 grabs for 30 yards. Overall, I’m confident in Williams’ ability to get past the 12.5 receiving yards that he is projected.