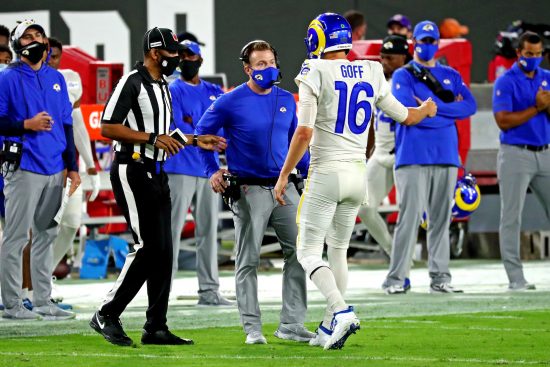 LA Rams and San Francisco 49ers are bringing us a clash in which both sides have to win. The situation in the standings is ruthless, and the loser here would suffer harsh consequences.

The 49ers are 4-6, and with a loss in LA, they are out of the playoff picture. Even though they are banged up and have enormous troubles with injured players, there isn’t an excuse for them right now. The only thing in their mind is a victory, as they face a “life or death” situation. The Rams pulled out a big result last Monday night, defeating the Tampa Bay Buccaneers on the road and restoring themselves as one of the contenders for the NFC West title.

Jimmy Garoppolo is out, which means that Nick Mullens and CJ Beathard are now in focus. It seems that the first one will start against the Rams, even though he didn’t shine against the Saints last week.

Mullens was 24-for-38 with 247 yards, one touchdown pass, and two picks. But we need to add that the 49ers were massacred with injuries in this clash. Apart from Brandon Aiyuk and Jordan Reed, he didn’t have a decent weapon.

That is expected to change on Sunday, with the return of Deebo Samuel, Raheem Mostert, and Tevin Coleman. Having these three guys would make things much easier for the entire team, and it is also expected to see Richard Sherman in the defensive crew. Those are excellent news for Kyle Shanahan whose been encountering some serious jinxes in this 2020 season.

Rams Keeping the Momentum Before Arizona

Although this match is extremely important for Sean McVay and his crew, the one that follows it is even more significant. Arizona Cardinals await the Rams two weeks for now in the crucial game of the campaign. But we will leave that for some other preview.

LA defeated Tampa Bay on the road, with Jordan Fuller picking Tom Brady twice and solving the match with 1:56 to go when he intercepted the six-time champ for the second time. The Rams’ defensive unit was superb, limiting Brady to just 216 yards and a poor passing percentage, 26/48.

Jared Goff, however, threw 376 passes for three TDs and two picks. He was organizing the attack very well, despite those two turnovers. Goff should use the swing here to build more confidence, as his team slowly raches to the season’s critical part.

49ers at Rams Head to Head

The 49ers defeated the Rams in their previous meeting this year. On October 18, Jimmy Garoppolo had a superb performance with three TDs, leading San Francisco to a 24-16 victory.

This is an easy one for us. Rams are the favorites, and regardless of the 49ers’ situation and mindset, the hosts will be routine in this match. LA’s ferocious defense will probably roll over Mullins, whose performances against much weaker units weren’t impressive at all.