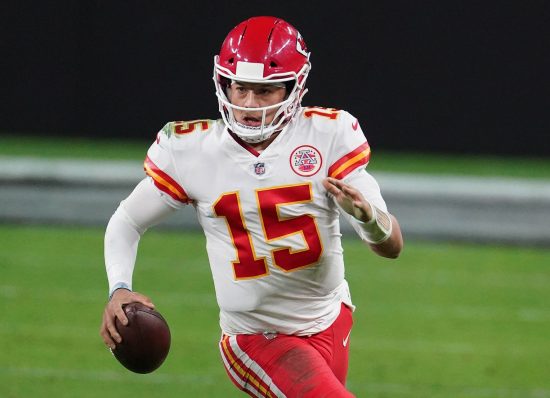 Tom Brady and his crew lost a very important match this Monday night against the LA Rams, and that might have tragic consequences on their playoff quest. In order to erase that minus, victory against the Super Bowl holder is imperative. However, the 9-1 champions look very good so far, even though they had two narrow wins lately. As far as they have Patrick Mahomes healthy and ready to play, this team has nothing to worry about.

Mahomes Solving All the Problems

In the 35-31 win against the Las Vegas Raiders, the Chiefs were behind coming into the final few minutes of the contest. That is when Mahomes stepped up, making a seven-play, 75 yards long drive that concluded with Travis Kelce’s touchdown reception.

That was Mahomes 27th TD toss this year, with only two interceptions. He leads the league with 3,035 passing yards, while his teammate and favorite target, Kelce, sits third in receiving yards with 896 since the campaign began. Overall, the Chiefs have the best offense in the NFL – it scores the most points, is the second-best in yards from the scrimmage, 414,1 per game, and has the best QB.

We can’t forget the defensive unit, as they too put up respectable numbers and are a top 10 in allowed points, 21.4, and allowed passing yards, 221.6 per event. They do not have a standout figure that leads the crew, but all contribute and work together.

This could be interpreted as Tom Brady fails to show up. We are aware that a vast army of no.12’s fans might be insulted by this sentence, but that is the reality. Brady performs under his standards, and prime-time matches are proving our claim. The Bucs lost three times in such situations, winning just one.

Furthermore, apart from the questionable Green Bay Packers, they didn’t defeat any other Super Bowl contenders. New Orleans defeated them without any problems, managing to humiliate the Bucs in their own house, 38-3.

Brady’s passing game is underperforming, and the stats of his receivers are definitely showing that. Mike Evans and Chris Goodwin both had just one event apiece with 100+yards in this campaign.

Chiefs at Buccaneers Head to Head

The Chiefs and the Bucs didn’t play much throughout history, only 12 times. Their latest clash came in 2016, with the Buccs winning on the road, 19-17. At the moment, they have six straight victories against this rival.

The Chiefs are a better team, and we don’t doubt their win here, even though Tom Brady is on the other side. Right now, if Buccaneers don’t improve something, they won’t be competitive in the playoffs (if they reach them at all), and this game will expose them even more. Our final suggestion, Chiefs with the spread.