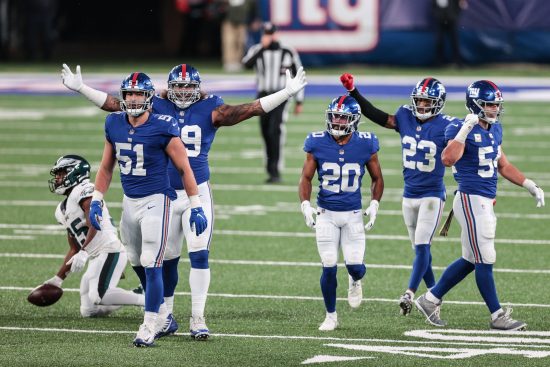 The post-Joe Burrow era begins for the Cincinnati Bengals in week 12 when they host the New York Giants.

The young QB will miss the remainder of his rookie season after tearing the MCL and ACL in his left knee last week, and it’s hard to see the 2-7-1 Bengals being very motivated the rest of the season. The Giants will take that, because at 3-7 they are just ½ a game out of the NFC East division lead.

Giants Need to Find Something on the Road

Even with the Bengals being banged up, New York is no sure thing on Sunday due mostly to their atrocious 1-4 record away from MetLife Stadium this season. The Giants have put together a nice little run over the last six weeks though, winning their last two and having their three previous losses coming by a total of just six points.

New York is also rested after being idle last week. The Giants have finally found a way to close out games with a 23-20 win over Washington and a 27-17 victory over the Eagles leading up to the bye. Prior to that the Giants had lost by 2 points to Tampa Bay, 1 point to the Eagles, beat Washington by 1 and lost to Dallas by 3.

New York found their offense in week 10 against Philadelphia, with Daniel Jones going 21/28 for 244 yards while gaining another 64 on the ground. Wayne Gallman had a couple rushing TDs and the Giants ran for a total of 151 yards. New York had 166 on the ground the week prior against Washington, so it’s likely that strategy stays in play vs. the Bengals’ #29 run defense.

What Next for Bengals Offense?

Losing Joe Burrow is a blow for the Bengals, but to be honest they weren’t any threat to make the postseason anyways. Burrow will miss out on experience, but could come back with even more weapons (or protection or defense) as Cincinnati is currently in line for the #3 draft pick in 2021. It’s hard to see the Bengals winning on Sunday and costing them a shot at a blue chip lineman like Penei Sewell, who was so good last year he received a Heisman vote.

The Bengals are a little demoralized while at the same time facing a Giants team coming off a bye, which isn’t a good recipe. Washington ran the ball well last week against Cincinnati with 164 yards, so a good day for the New York offense should be in store.

Another issue that Cincinnati is likely to face on Sunday is the inability to sustain drives, which will in turn tire their defense even more. Ryan Finley was just 3/10 with an INT in relief of Burrow last week, and he’s not even getting the chance to start this week with Zac Taylor turning to Brandon Allen instead. Allen is a former 6th round pick out of Arkansas who did start three games for Denver last season, but is being signed off the practice squad for Sunday’s game.

If the Giants lose this one it’s inexcusable. Cincinnati is going with a practice squad QB in a game they shouldn’t want or need to win. NYG is still in the playoff hunt in the East and off the bye last week.