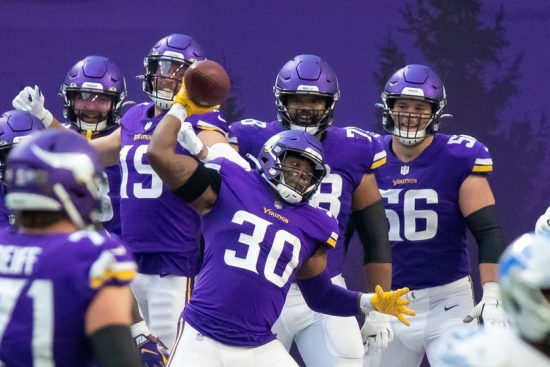 Minnesota Vikings suffered a very tough loss last Sunday and are in a desperate situation. They need to defeat the Carolina Panthers and stay in the playoff picture.

Instead of going up using a good schedule, the Vikings made a step back against the Cowboys, and are walking on razor blade when it comes to the playoff battle. If they lose one of the next two games, Mike Zimmer’s team is out of the hunt. As for the Panthers, a 20-0 win against the Lions is something they needed to boost the morale and to realize that playing without two top players isn’t the end of the world.

We can’t understand how did the Vikings manage to lose at home to the shorthanded Cowboys. We really can’t. After beating the Packers and the Bears on the road, and the Lions at home, Minnesota missed a perfect chance to reach .500, and with wins in two more games at home, completely comes back into the playoff contention.

The decisive factor in this match were two fumbles made by the Vikes’ top players, Kirk Cousins and Dalvin Cook. Both of them had superb performances, Cook 115 rushing yards and a TD, and Cousins 314 yards with three touchdowns.

Adam Thielen was superb as well, catching 8 passes for 123 yards, two of them inside the end zone. We need to mention the rookie WR Justin Jefferson who added another TD to his tally, his third of the year. Jackson has 762 receiving yards so far and is on his way to surpass the 1,000-yard mark.

Teddy Bridgewater became an NFL star while wearing the Vikings’ uniform. However, injuries prevented him from becoming the franchise face, and he had to try out his luck somewhere else. The Panthers’ QB has solid chances of recovering for this match after skipping the game against the Lions.

PJ Walker jumped in that one, posting one touchdown pass and two picks, but without some bigger consequences. The former XFL star had 258 yards through the air, 24-of-34.

Christian McCaffrey should be in the lineup, and that makes the Panthers much more dangerous than until now. We are more than positive that CMC deserved the NFL MVP award last year, with 1,000+ yards in both receiving and rushing, but that the Panther’s poor results prevented him from getting the same.

Panthers defeated Minnesota in the previous encounter in 2017, 31-24.

There is no debate here- Minnesota’s victory is the ultimate suggestion. If the hosts lose, that will ruin their season, so any other prediction, in this case, has no logic. Even though CMC and Teddy B are probably going to be ready, Vikes are a better team, and also, we can’t believe that they might lose two events in a row at home against the sub-.500 teams.