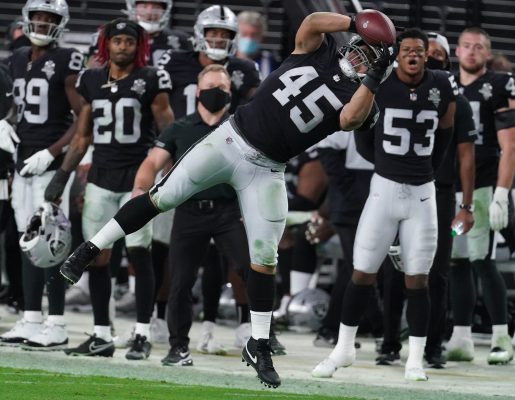 The Las Vegas Raiders (6-4) are traveling to Georgia to take on the Atlanta Falcons (3-7) next weekend. Both teams are coming into the NFL Week 12 after losing their games last weekend.

The Falcons got torn apart by the Saints, while the Raiders were on the brink of beating the Chiefs until 14:32 when Travis Kelce scored a TD. Although they lost, the Las Vegas franchise didn’t get embarrassed against the reigning Super Bowl champ, which explains why they are the favorite for the Raiders at Falcons game.

If they manage to win on Sunday afternoon, the Raiders are going to put an end to Atlanta’s winning streak against them. Since 2000, the team from Georgia has won every single Raiders vs Falcons duel.

With 286 points scored in 10 games, the Las Vegas Raiders stand as the #3 most productive offense in the AFC. Only the two top teams (Steelers and Chiefs) have scored more so far.

What’s making the Raiders’ fans enthusiastic is that this team’s offensive performances seem to be improving all the time. We saw them scoring over 30 points in each of their previous three weeks.

The Raiders did lose to the Chiefs last weekend, but it was a very tough game. In fact, they were very close to causing the #1 Super Bowl favorite their second defeat of the season.

Just 30 seconds before the game, the Raiders had a 3-point advantage over the Chiefs, but they blew it. Mahomes passed the ball to Kelce who scored a touchdown at 14:32 in the final quarter.

The Chiefs at Raiders game showed that even though they’re great in the offense, Las Vegas isn’t very good when it comes to defending. In fact, they have the 3rd-worst defense in the AFC, with 276 points conceded.

The question is can Atlanta take advantage of this fact?

Atlanta Coming Off the Worst Offensive Performance of the Season

Last Sunday, Atlanta scored only 9 points in their defeat to New Orleans. That was the Falcons’ worst offensive performance of the 2020 NFL season.

Still, the fact is that they played against one of the best defensive teams in the league. Plus, the leaders of the NFC have been in great form lately, especially when the defense is concerned. Before beating Atalanta, New Orleans conceded only 16 points in two games (against the 49ers and Buccaneers).

Knowing all this, not being able to score much against the Saints does not mean the Falcons are bad in the offense.

Furthermore, their form seems to be improving. After losing five straight games at the start of the season, they managed to get themselves three wins since mid-October.

The Raiders are a better team than the Falcons. However, both teams seem to be improving their form, so we might be in for an entertaining duel on Sunday. Given the fact that both teams are better in the offense than defense, we’re probably going to witness a lot of points.