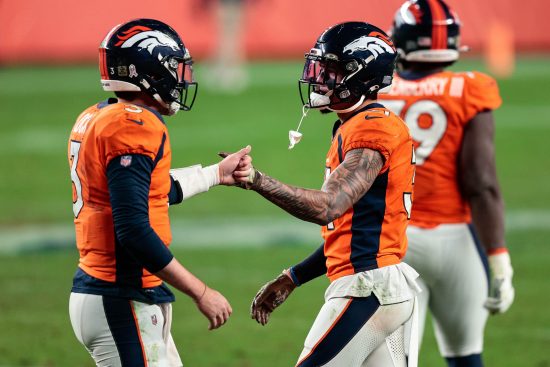 The New Orleans Saints survived without Drew Brees in a 24-9 win over the Falcons last week, but is Sean Payton’s team in a tough spot on Sunday with a visit to the Denver Broncos? Denver hasn’t done much to think they’d put up a fight in this week 12 matchup, but these are the exact types of situations that trip up a surging team like New Orleans, especially in a visit to the atmosphere of Mile High Stadium.

Payton’s choice to go with the versatile Taysom Hill over the experienced Jameis Winston at quarterback last week was met with some controversy, but the 15 point win over Atlanta proved it was the right move. Hill was a very efficient 18/23 passing while adding 49 yards and 2 TD on the ground.

With Brees still out with injured ribs, it will once again be Hill making just his second career start on Sunday. There are reasons to think a regression is possible, notably Hill starting on the road for the first time and the fact that there is now game film to prepare for. The QB could also be more comfortable in his 2nd start however, and the Saints still have great weapons led by Michael Thomas who had his first 100+ yard game of the season last week.

Expect the Saints to feature Alvin Kamara more this week as well, after the star RB had a TD last week but was also held without a reception for the first time in his NFL career. Running backs can also get right vs. the Denver defense, as the  Raiders’ Josh Jacobs and Devontae Booker both had two rushing TDs in a win over the Broncos in week 10.

The big storyline heading into Sunday’s tilt has to be how hard it is to go to Denver and get a win, as evidenced by Miami’s 20-13 loss at Mile High last week. The defeat snapped a 5-game win streak for the Dolphins, and Vic Fangio drew up a defense that held Miami’s Tua Tagovailoa to an 11/20, 83 yard passing performance that got him benched. The rookie Tagovailoa actually has more NFL starts than the Saints’ 3-year veteran Hill (4 to 1).

Even with what could be considered a good day from Hill last week, the Saints offense still only put up 24 points against Atlanta’s 3rd worst defense in the NFL. For all their offensive inefficiencies, Denver still has the #13 ranked total defense in the NFL which includes the 9th best unit vs. the pass. By no means are the Broncos indestructible however, as the Chargers had 275 yards passing and another 210 on the ground in a week 8 loss at Mile High Stadium.

An overlooked aspect of this meeting is the Saints defense against struggling Denver QB Drew Lock. New Orleans has allowed 25 points total the last three weeks, and picked off veterans Tom Brady and Matt Ryan 5 times over that span. Lock has 11 INTs in the last 5 games alone.

This games looks like your classic grind-it-out, last possession wins, game. It’s hard to see Hill and Lock getting into a shootout, and the best wager in this one is an under on the 42.5 total. Denver getting 6 is still too many points though.