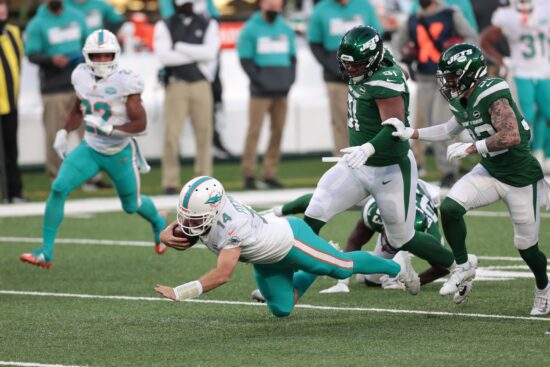 Both Cincinnati Bengals and Miami Dolphins are without their first-choice quarterbacks, Joe Burrow and Tua Tagovailoa, respectively. As a result, the Bengals at Dolphins is going to be a clash between two backup QBs, Brandon Allen and Ryan Fitzpatrick.

Allen made his debut as the starting quarterback for the Bengals in their previous game, which saw them losing to the in-form New York Giants by 19-17.

Dolphins’ Fitzpatrick is coming off a pretty decent display against the New York Jets last Sunday, when he passed for two touchdowns, helping his team win by 20-3.

Having a more experienced QB to lead their attack is one of the reasons why the Miami franchise is coming into the Bengals at Dolphins as a 12-points favorite. For more reasons, keep on reading!

Ahead of the Bengals at Dolphins clash on Sunday, everyone appears to be talking about the injury crisis both teams are experiencing. The team from Cincinnati seems to have it worse, with their QB Joe Burrow facing a long recovery following torn ACL.

Brandon Allen was chosen as the replacement for the no.1 overall pick in the 2020 NFL Draft. However, Allen was far from impressive in his first game of the season.

The bad news for Cincinnati keep on pilling, as QB is not the only position they’re having problems with. Several other players from the offense are out because of injury/illness, including wide receivers Mike Thomas and A.J. Green. Add to the list Auden Tate, who’s still carrying a shoulder injury, and the number of Bengals’ WRs is currently only four.

Over in Miami, QB Tua Tagovailoa is currently recovering from a thumb injury. The question is whether he’ll be ready for the game on Sunday. According to recent reports, the chance is 50-50 for that to happen.

Nevertheless, even without the rookie reclaiming his spot, the Dolphins shouldn’t be too concerned about the QB position. After all, they got the 38-year-old NFL journeyman Ryan Fitzpatrick to lead their offense. What’s looks like a bigger problem for them is that other players from the offense haven’t been playing very well lately.

Whether it’s Ryan Fitzpatrick or Tua Tagovailoa, the Dolphins should not be too concerned about the QB position. Last weekend, Fitzpatrick was the starter when his team played the New York Jets. We saw him doing pretty well in that game, making 24 successful passes of 39 attempted, covering 257 yards, and helping his team get two touchdowns.

The Dolphins must feel they could’ve done even better in that game, but other members of their offense didn’t do great. In fact, Miami’s offense has been this team’s Achilles’ heel this season.

In the first couple of weeks of the 2020 NFL season, Miami’s defense and special teams were the ones to generate a lot of points. Lately, however, getting points has been almost entirely the job of the offense, which explains why they haven’t been scoring very much. In the previous two games, for instance, this team has scored a total of only 23 points.

The oddsmakers have set the spread to 11.5 points, which may seem a bit high. Even though the Bengals are one of the worst teams in the NFL, they’ve lost only two games by 12 or more points difference.

It happened against the Baltimore Ravens and the Pittsburgh Steelers, both of which are much, much better teams than the Miami Dolphins.