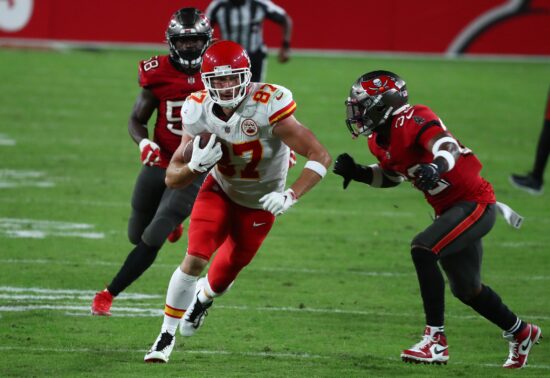 The Denver Broncos go from playing without a QB last week in a loss to the Saints, to facing the top signal caller of the current era when they visit Patrick Mahomes and the Chiefs on Sunday Night Football.

Denver expects to get at least a couple of the quarterbacks who were ruled out last week back, but unless one of them is John Elway in his prime the Broncos look to be in trouble.

Does Denver Get Any Better With Their QBs Back?

Much was made of the Broncos having to go with practice squad wide receiver Kendall Hinton at QB last week after Drew Lock, Brett Rypien, and Blake Bortles all came in contact with Jeff Driskel who had a positive COVID result. As expected, Hinton struggled going 1/9 for 13 yards with 2 INT, but there’s not a lot to be optimistic about even with the reinforcements back.

Drew Lock will presumably be the starter vs. Chiefs on Sunday, but he doesn’t pose a huge threat to a Kansas City defense that faced Tom Brady last week. Lock has thrown 11 INT over the last six games, including a 24/40 day with 2 INT in a 43-16 loss to the Chiefs at home in week 7.

Denver had just 112 total yards last week against the Saints, albeit against a good New Orleans team that has allowed just 28 points total the last four games. The Broncos are 26th in passing defense and the 2nd worst team in points allowed/game in the NFL. Kansas City sees those stats and starts licking their chops.

Sunday night’s meeting with Denver is unlucky for the Broncos in the essence that it comes on a national stage. The Chiefs may be prone to get complacent on an afternoon game at Mile High Stadium, but they’ll have no problem stepping things up in front of a big audience.

Despite taking the spotlight on Sunday night, KC could be ripe for a trip up. The Chiefs have avenged their only loss of the year in a 35-31 win over the Raiders two weeks ago and Mahomes outlasted Tom Brady 27-24 last week. There’s nothing spectacular about Kansas City’s visits to Miami and New Orleans as well as hosting the Falcons and Chargers over the final month of the year.

Mahomes did have a less than stellar performance when the Chiefs and Broncos met up on October 25th, going 15/23 for 200 yards and a TD. That’s something to build on for the Denver defense, but it was also a snowy day at Mile High Stadium. Since that game, the Kansas City QB has tossed 14 TD to just 1 INT.

Oddsmakers are in a tough spot in trying to find out a line that bettors won’t touch in this matchup of QB stability vs. sheer ineptitude at the position. Kansas City is 1000% the better team, but in this marquee tilt when the whole public is going to chase you have to fade.