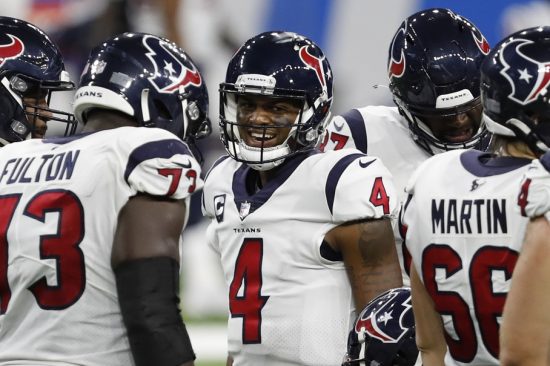 The Houston Texans and the Indianapolis Colts play their most important game of the season.

The Colts had everything in their hands, but eventually returned the favor to the Tennessee Titans, allowing them to head back home with a win, the same as Indianapolis did two weeks ago in Nashville. They lost the breakpoint against the biggest rivals for the top of the AFC South. Now, Colts need to protect the second spot, as the fired-up Houston Texans await them at the NRG Stadium. For both, this is a “do or die” moment.

Rivers Stepping Up or Sealing his Future

We’ve expected more from the veteran QB, but it seems that he doesn’t have the capacity to become a winner, despite his extraordinary experience. There is no consistency in his game, and even when the Colts win, Rivers isn’t the reason for that.

One of the best passers in the history of the league has 16 TD tosses and nine interceptions, which is pretty low when you have arguably the best offensive line in the NFL ahead of you. He was 24-for-42 against the Titans for 295 yard, which isn’t that bad, but he wasn’t there to stop the guests’ momentum following Derrick Henry’s monstrosities.

The defense that allows around 104 yards on the ground per game saw Henry tallying 178 with three touchdowns. They were pretty much helpless, and we somewhat understand that, but Rivers’ subpar performances have no alibis. If he doesn’t step up here, the Colts won’t extend his deal next year.

The franchise from Houston has three wins in the past four games, with the only loss coming against the Cleveland Browns on the road, 10-7. Even in that one, the Texans didn’t deserve to lose.

Watson has nine touchdown passes in those four events, not being picked a single time, with a passer rating above 109 in all three victories. He was a dual-threat, often moving the chains himself, or even scoring, like against the Patriots.

The positive thing here is that he woke up Will Fuller, who had 171 yards in the latest win against the Lions, with Brandin Cooks also posting a solid performance.

The first clash this season saw fireworks in Nashville, with the hosts winning only after overtime, 42-36. Derrick Henry had 212 yards with two touchdowns, while Tannehill threw four TD passes and 366 yards. Watson also had four TD tosses, and 335 passing yards.

The defenses won’t be of great value in this event, and the accent of both coaches will be on the offensive gameplan. The limit for the total points is set at 54.5, and after looking at the overall form of the teams, and their previous encounter, it wasn’t hard to pick over.