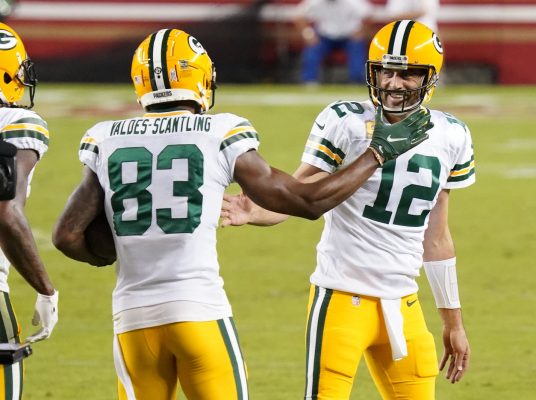 Philadelphia Eagles are desperate to make a surprise at Lambeau and beat the Green Bay Packers.

The Eagles slipped down from the top of the NFC East with a loss against Seattle on Monday Night Football, meaning that they lost the playoff berth, too. A night before, the Packers demolished their big rivals, the Chicago Bears, strengthening their position at the top of the NFC North. Rodgers and the boys are near clinching yet another divisional title, but what is more important, the Packs want to improve their position in the NFC standings.

Each week we here at VeggasOdds.com are discussing the possibility of seeing Jalen Hurts in the starting lineup instead of Carson Wentz. There were some indications this Friday that the head coach, Doug Pedersen, decided to make the switch, but they appeared false.

And as for Wentz, he continued in the same manner, making turnovers, inaccurate passes, and suffering sacks. At the moment, he leads the league in the next three negative categories – interceptions 15, Sacks 46, and off-target incompletions 95.

The Eagles’ offense scored 17 points for three straight games in a row, this time against the Seahawks’ whose defensive unit is anything but spectacular. So, to be honest, it is time for Wentz to sit and to see Hurts’ abilities. At least, he will be without pressure from the media, which is Wentz’s biggest problem at the moment.

Packers Eyeing the Top of the NFC

If Matt LaFleur’s team didn’t lose the game in Indianapolis against the Colts two weeks ago, they would be now tied with the Saints at the top of the conference. Having in mind that Packs have a very favorable schedule until the end of the regular part of the season, the top spot is still reachable, even though they failed to show up against big teams.

Green Bay demolished the Chicago Bears on Sunday, 41-25. Rodgers had four touchdown passes and just 211 yards, diversifying the offense and giving each receiver his share of action. All four scores were towards different receivers, Tonyan, Adams, Lazard, and Lewis.

Meanwhile, the running backs, Jones and Williams, were also heavily involved combining for 163 yards and a touchdown. Overall, the Packers were looking great, but we need to tell you that being awesome against Chicago isn’t hard in the past couple of weeks.

Philly defeated Packers in Green Bay last year, 34-27, inflicting them one of the rare losses in 2019.

The total number of points is set at 48.5, and for us, this is a clear over. Philadelphia has problems with protecting its QBs, which means that Rodgers will have plenty of opportunities to have another efficient weekend. We often saw the Packs slowing down in the final period, allowing the rivals to score some points, especially once they had the lead. Therefore, we will go with Over in this matchup, as it seems to be the safest pick of all.