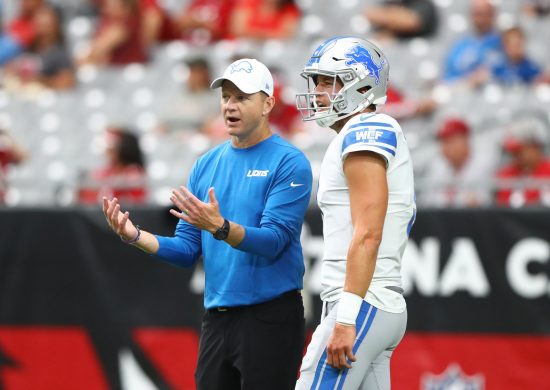 The Lions at Bears game on Sunday afternoon is going to be the first time Darrell Bevell is in the role of the head coach. He’s been given this role by the Lions’ owner Sheila Ford Hamp following the sacking of Matt Patricia.

This drastic measure was supposed to snap out the Lions from the bad form they’re in. The trouble is that oddsmakers think it can make things even worse.

The Lions were the favorite against the Bears when the initial odds were released. However, after the news about Patricia came in, the roles reversed – now the team from Chicago is favored to win the game.

Matt Patricia Out, Darrell Bevell In

On Saturday, the Detroit Lions fired head coach Matt Patricia and general manager Bob Quinn. It happened only two days after this team lost to Houston Texas, which was their fourth defeat of the season.

The new man in charge is Darrell Bevell, the offensive coordinator, who’s going to be the Lions’ new head coach for the time being. The general manager is the role three front-office executives will share, namely Lance Newmark, Rob Lohman, Mike Disner, and Kyle O’Brian.

The news wasn’t received very well by the fans, many of whom believe it was a big mistake to fire Patricia. After all, the Lions have lost only four games so far, which isn’t that bad. On the other hand, Patricia and Quinn did fail to lead the Lions to getting over .500 in the last two seasons.

What seems to be the biggest issue surrounding the coaching change is timing. For many fans, it’s crazy to sack the head coach and GM mid-season, especially because the next game is Lions at Bears, which Detroit was predicted to win easily.

With the new men in command, Detroit’s chances do not look that good.

A Fantastic Opportunity for the Bears to End the Losing Streak

The Chicago Bears have lost their previous five games in the NFL. Despite starting the season well, they got themselves in a pit, from which they’re struggling to get out.

Last Sunday, they played the Green Bay Packers and lost 41-25, which we expected to see in that game. The Packers were -400 in that game. However, the Bears did surprisingly well in the offense, despite the fact that their current first-choice QB Nick Foles was out due to a hip injury.

Instead, Mitch Trubisky played the role of the QB but didn’t do too well, completing only 56.52 of his passes. Nevertheless, the Bears did manage to score three touchdowns against the #2 team in the NFC.

That’s something that’s certainly giving them confidence ahead of the Lions at Bears game. Another thing that’s making them feel good is the news that Nick Foles might return in time to take a part in that game. According to coach Matt Nagy, Foles’ injury “wasn’t as bad as we once thought.”

The Lions’ decision to fire Patricia has made the Bears enthusiastic about their chances on Sunday. This is only the second time the Bears are coming into a game bearing the role of the favorite this season. Previously, it happened when they played against the New York Giants.

Even in the game Bears played against the Lions in the opening round of the 2020 NFL season, the team from Chicago was the underdog. Nevertheless, the Bears managed to win that game. They should be able to win this one as well.