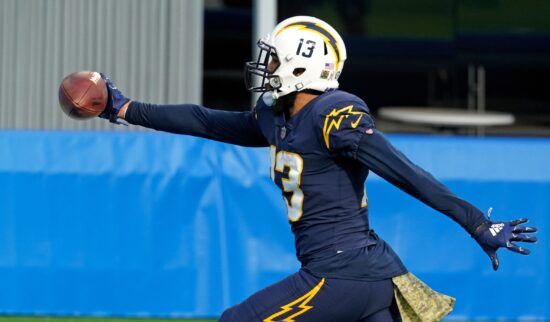 The New England Patriots and Los Angeles Chargers meet up in what is essentially a toss-up game Sunday at SoFi Stadium.

Oddsmakers are calling this game a good old fashioned Pick ‘Em, which would give the lean towards the Chargers despite the fact they are a meager 2-3 at home this season.

New England travels cross-country, but is also riding an impressive 20-17 win over the Cardinals last week.

Can Belichick Dial Up Another Strong Defensive Outing?

The key matchup in Sunday’s tilt is the New England defense vs. the Chargers offense. The Patriots held Kyler Murray and the Cardinals offense in check last week, allowing a manageable 138 yards on the ground to the #4 rushing offense in the NFL and held Kyler Murray to 170 yards passing, with Deandre Hopkins having only 5 catches for 55 yards.

New England scored the upset win last week, but it was also at home. The Patriots now have to go on the road to face another high quality offense backed by a young QB. The Chargers are 3rd in the NFL in total yards/game and have the #2 passing attack. L.A was shut down for the most part in a 27-17 loss at Buffalo last week however.

The Patriots got the win over Arizona last week in spite of their offense and not because of them. QB Cam Newton was just 9/18 passing with 84 yards and 2 INT. New England had just 179 net yards vs. the Cardinals, and now rank 27th in the NFL in points per game.

Do Chargers Want to Win This One?

It would be a great victory for L.A. to topple the once-proud Patriots on Sunday, but are the Chargers really valuing wins and losses right now? L.A. Currently is on pace for the #5 pick in next year’s NFL draft, and have only beaten the Jaguars and Jets over their last 10 games.

Despite their record, the Chargers are one of the most dangerous teams to bet against in the NFL. Prior to last week’s 27-17 loss to Buffalo, all 7 of the Chargers losses had been by one score or less. A lot of that success has to be attributed to the emergence of Justin Herbert, who has amassed 3,015 yards with 23 TD and 7 INT in 10 games.

Herbert threw for 316 yards last week, but the Patriots also come in having held another stellar young QB to a manageable game. The real X-factor in this tilt could be the Chargers defense which is led by Joey Bosa who had 3 sacks, 6 tackles for losses, and a fumble recovery vs. Buffalo. Cam Newton runs a very similar mobile style to the Bills’ Josh Allen as well.

New England could be a popular play on Sunday afternoon, especially since L.A has found some innovative ways to lose lately including blowing a 24-10 lead heading into the 4th quarter in week 8 at Denver. The Patriots offense is a hard watch, but at least they have something to play for, sitting right behind Baltimore for the 9th playoff spot.