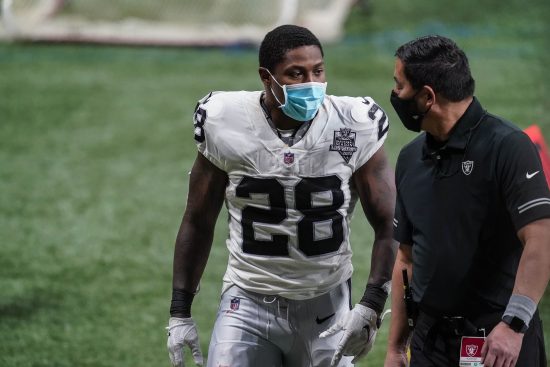 The New York Jets are getting worse and worse, which is something the shaken Las Vegas Raiders need to utilize.

After a few good games, the Raiders are all of a sudden in big trouble. They are 6-5 and are on the verge of losing the playoff spot, even though Jon Gruden’s side definitely deserved to reach the postseason. As for the Jets, they do not surprise anyone with their amateur performances. If we were in Trevor Lawrence’s place, we’d think twice about playing for the Jets next year.

Erasing Atlanta As Quickly As Possible

We are more than positive that this is what Gruden told his team in the locker room following their devastating experience against the Falcons. The hosts in this event, trashed silver and black 43-6, inflicting them the most unpleasant loss since the start of the campaign.

Derrek Carr had a nightmare performance, throwing for 215 passes and one pick, not connecting with either of his receivers in the endzone. Besides this, the Raiders’ QB had three lost fumbles, and suffered three sacks. It couldn’t be much worse.

Josh Jacobs had 27 rushing yards, and a fumble in this event. That too, tells a lot about the overall performance of the franchise from Las Vegas. Two starters, five turnovers without a touchdown.

They must forget this Sunday ASAP, and turn their attention towards the struggling Jets. An easy win is near, they only have to be focused and composed, nothing more.

After skipping four of the last six games, Sam Darnold was expected to come back and add some positive colors to the Jets’ dark season. Instead, the young QB blended in the environment, posting another terrible performance.

He was 16-for-27 without a TD pass but with two interceptions and absorbing three sacks. At least, he didn’t have any fumbles, unlike Carr, if that is of some consolation to him. This is another proof that the Jets made the wrong decision three years ago once deciding to pick his as the third overall choice.

Quinnen Williams was the only bright spot in NYJ’s lineup, with the 22-year old defensive tackle posting two tackles for a loss and 1.5 sacks. He was one of the rare on the field, willing to fight back at the Dolphins, who routinely won this match, 20-3.

Jets would trash the Raiders last year at MetLife, 34-3. Darnold had a superb game with 315 passing yards for two TDs and one rushing TD as well.

The spread on the Raiders is -7.5, and even though many believe betting on them to cover it might be tricky after a high loss, we don’t see why Gruden’s boys couldn’t beat the 0-16 Jets by 8 or more points. It is one touchdown and one field goal of difference.