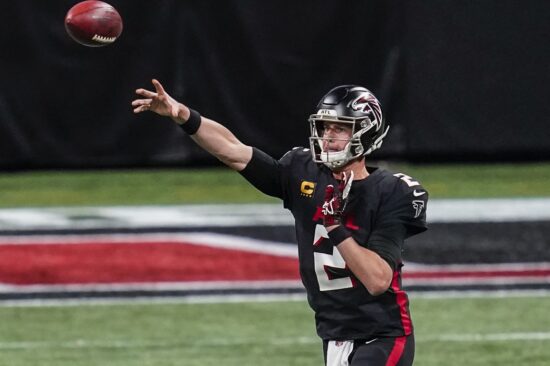 The New Orleans Saints and Atlanta Falcons meet up for the second time in three weeks when they square off Sunday afternoon at Mercedes-Benz Stadium. New Orleans was victorious in week 11, toppling Atlanta 24-9 in Taysom Hill’s first start at QB for the injured Drew Brees. The Falcons have film to game plan on the dual threat Hill now though, does that give them an edge in the rematch?

New Orleans wasn’t in the best spot in losing the 13-time Pro Bowler Brees, but they’ve made the most of it. Hill was a very efficient 18/23 with 233 yards in the first meeting with the Falcons in his first ever NFL start. Most of Hill’s damage has been done on the ground though, as he rushed for two TDs vs. Atlanta and another two scores last week in a 31-3 win over Denver.

The victory over the Broncos looks like a dominating performance for New Orleans, but Denver also infamously had four QBs land on the COVID/reserve list just a couple days before the game. The Broncos started practice squad WR Kendall Hinton at QB, and not surprisingly he went 1-9 for just 13 yards with 2 INT.

Regardless of who was at quarterback for Denver, it was yet another strong showing for the Saints defense in allowing only 112 total yards. New Orleans has risen to the #1 total yard defense in the league, including 5th vs. the pass and 2nd vs. the run. Atlanta managed just 52 yards rushing and 196 passing against the Saints in the November 22nd meeting. The Saints have allowed only 28 points total the last four games.

There are some reasons to like Atlanta on Sunday as +3 point home underdogs. First off the Falcons are coming in off a 43-6 victory over Las Vegas last week, a Raiders team that has played the Chiefs tough twice this season. Prior to last week’s win, Jon Gruden called the Falcons the best 3-7 team possibly in NFL history as three of their defeats have been in blown 4th quarter leads.

Falcons QB Matt Ryan was no better than decent in the win over Las Vegas, going 22/39 for just 185 yards with 2 TD and an INT. One bright spot was that Ryan was sacked only once vs. the Raiders, after taking eight the previous week vs. New Orleans on 11 QB hits.

Another thing going for the Falcons on Sunday is the fact that New Orleans’ offense is far less dynamic with Hill at QB. He was just 9/16 passing last week vs. Denver for 78 yards with an INT and Alvin Kamara has had the ball all but taken out of his hands since Brees’ injury. Kamara was held without a reception for the 1st time in his career the last meeting with Atlanta and had one catch for -2 yards vs. Denver with just 54 on the ground last week.

Atlanta has won two straight at home, and their three previous losses in Georgia came by a combined 12 points. There’s more film compiled on Hill on a weekly basis, which should allow the Falcons to sniff an upset.