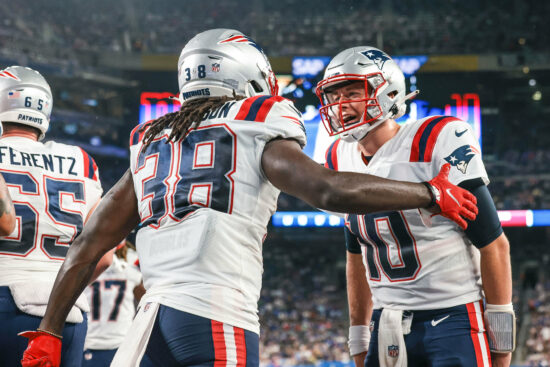 The game at MetLife Stadium brings us two youngsters who could easily turn out to be the next generation of stars in the NFL. Fresh out of college, Mac Jones and Zach Wilson square off in the AFC East derby.

Jones After His First Win

To be honest, even though the Pats lost, we are more than satisfied with the way their rookie QB started his NFL adventure. Jones threw 281 yards, completed 29 of his 39 passing attempts, for one TD. All in all, that is great for a guy in his position. Don’t you forget, this fella has to fill in some big shoes, and he is under a lot of pressure.

What we didn’t love in the Pats’ game is rushing. Yes, Damien Harris did an excellent job, having 23 reps for 100 yards, but all the others combined for 25 yards, which is awfully low. And yes, we are looking in James White’s direction (four rushes, 12 yards).

The O-line was very stable, allowing Jones to have enough time inside the pocket and protecting the youngster well. We also need to mention that the defense didn’t have one of its best days but was still competitive.

The second overall pick from this draft was excellent against the Panthers. Despite his Jets losing 19-14 and Sam Darnold getting his revenge over the former team, Wilson’s debut was in the center of attention. He threw 258 yards for two TDs and one pick and was sacked six times for 51 negative yards. But believe us when we say that none of these sacks was his fault, it was all O-line’s.

Robert Saleh needs to do something with his QB protection, and he needs to do it fast; otherwise, this young slick might suffer more dangerous hits and be demoralized.

Also, the NYJ’s defense was looking solid despite losing. The 57-yard TD from Robbie Anderson wasn’t supposed to happen, but on the other side, their defense in the red zone and on third downs (4/14) looks promising.

Patriots vs. Jets Head to Head

The Pats have 10 consecutive wins over this rival, one of the most ruthless dominations in the divisional rivalries. Last year they posted a 30-27 win in New York, and the second matchup of the year saw them triumphing at home, 28-14.

The Pats’ defense should roll over the Jets’ mediocre O-line. If the Pathers produced trouble for Wilson and his protection, just imagine what New England would do to them. Overall, the guests have a better team, and for us, there isn’t too much doubt in this case.