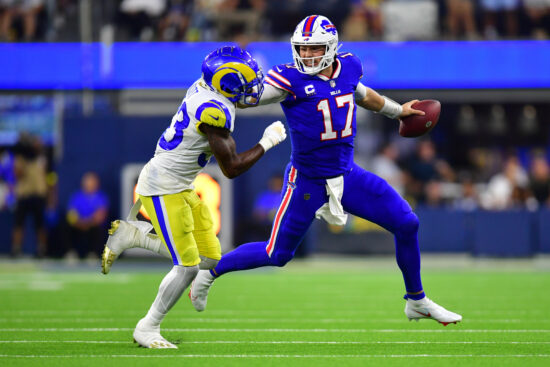 If you’re looking for some of the best NFL Week 2 predictions, you’ve certainly come to the right place, Vegas Odds has you covered!

The NFL season has begun! With the first week wrapping up, there are some more great-looking bets to consider for Week 2.

The Rams lost their opening matchup against the Bills by a score of 31-10. The Rams got beat on both sides of the ball, but no one had it worse than running back Cam Akers. Expected to be the starter, Akers was out-touched by fellow running back Darrel Henderson Jr. 18-3. Akers finished with no yards, creating a grim outlook for his usage during the remainder of the season.

After spending the whole offseason recovering from an Achilles injury he suffered last year, Akers looked sluggish in his few attempts against the Bills. Even worse was his presence in the passing game, where he missed a few key blocks, allowing Bills defenders to get to Stafford. All that points towards Akers’ usage being even more limited in week 2.

Justin Herbert threw 35 or more pass attempts 14 times last season. In both matchups against the Chiefs last year, he had 38 total pass attempts. After a divisional matchup with the Raiders, the Chargers get another high-flying matchup against the Chiefs. Herbert is likely to throw a ton of passes, especially as the game reaches its conclusion.

Herbert’s top targets are wide receivers Keenan Allen and Mike Williams. Running back Austin Ekeler is also an effective option in the passing game. The Chargers have high expectations for this season after narrowly missing last year’s playoffs. The pressure of these expectations and the Chargers’ ability to succeed will fall squarely on the shoulders of Justin Herbert.

ALSO SEE: Poirier vs. Chandler Set for UFC 281, the Diamond Opens as Favorite

After winning his second Super Bowl with the Rams last season, Von Miller decided to take his talents to Buffalo. Seeking to become the first player to win a Super Bowl on three different teams, Miller started his Bills career with a bang. His presence was felt all night long. He finished with 2 sacks and 4 tackles, playing a major role in the Bills’ ability to completely shut down Matthew Stafford.

After dominating the Rams in Los Angeles, the Bills return home for a matchup against the Titans. The Titans offensive line was among the worst in the NFL last year. Expect the Bills to stack the box on Derrick Henry and rush Tannehill heavy and often. The Titans also saw the departure of top WR A.J. Brown. The Bills defense should feast in this matchup, and Miller is no exception.

Last season, Cooper Kupp finished with the wide receiver triple crown, offensive player of the year, and Super Bowl MVP. He just started this year with an equally impressive performance. He finished his first game on Thursday with 13 catches for 128 yards and an incredible toe-tapping touchdown. Kupp’s production was very reminiscent of his historic 2021 season.

The Rams passing game had almost nothing outside of Kupp in their loss against the Bills. Kupp’s ability to produce against the very best defenses shows his skill as a receiver. Next up, the Rams should have a much easier matchup against a rebuilding Falcons defense. Kupp could match his performance from week 1 and then some against the Falcons. Expect him to have another big game.