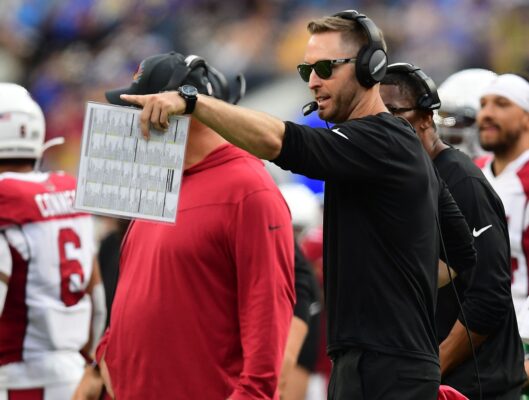 Several big news from across the league hit the media headlines this Saturday, and some of them could have a massive impact on the odds.

Arizona Without a Head Coach

Kliff Kingsbury won’t lead the Cardinals this Sunday in Cleveland against the Cardinals. He tested positive for COVID-19 and has to undergo health and safety protocols.

Kingsbury was present at the practice on Friday, having interaction with numerous people during that day. Among others, he was speaking with the media representatives as well.

For now, the Cardinals are the underdogs at +150, but those numbers are slowly going against the franchise from Arizona. They will especially change if there are more positive cases involved after today’s testings.

CMC Out for the Third Straight Game

Panters’ dual-threat running back, Christian McCaffrey, will be out for tomorrow’s game against the Minnesota Vikings in Charlotte. It is one of the most important matches for Carolina this year, but it seems that McCaffrey’s hamstring didn’t heal well.

Matt Rhule’s guys are underdogs, +130, and it seems that such odds are likely to stay until the start of the game.

Jones Clears the Protocol, Available for the Rams

Daniel Jones took a nasty hit last Sunday, and his eligibility for the upcoming match against the Rams was questionable. Yet, Jones cleared all the steps in the concussion protocol and is now free to start the contest against one of the biggest Super Bowl contenders.

However, the question stands will head coach Joe Judge risk and use Jones in the match, which is pretty much lost. The Rams are the absolute favorites at -400 while Giants’ win stands at +300.

Furthermore, the other two NYG playmakers won’t be available, RB Saquon Barkley and WR Kenny Golladay. Using Jones, who isn’t 100% healthy, might be a bad idea against Aaron Donald and the rest of the Rams’ defense.

Jaire Alexander is already on the injured reserve because of a shoulder injury. After yesterday’s practice, Kevin Kings is definitely out for the game against the Bears due to the same trouble.

This leaves the Packers in a tough situation, without their starters in the secondary, who have been doing a solid job up to this point. Both King and Alexander had a big impact on the field.

On the other side, the Bears are one of the worst passing teams in the league this year, which is good for Green Bay. The rookie Justin Fields still didn’t adjust to the starter duties, and all that works in favor of the Packs, who are heavy favorites at Soldier Field. -250.

The odds haven’t been going up or down following this news, as bookies believe that Chicago doesn’t have a quality to use King’s absence.