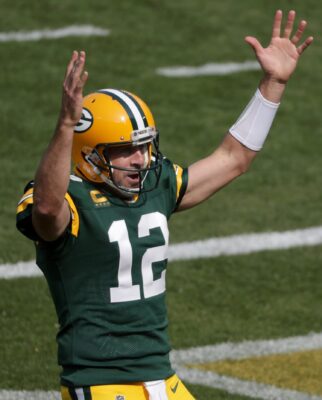 Of course, everyone appreciates the irony of Aaron Rodgers’ current situation with Jordan Love as it’s precisely what happened with Brett Favre when he left Green Bay, but Rodgers is still playing at an elite level and it’s too early to move him on.

A contract extension was signed eventually so that generally means things are sorted out for a few years, but there are some similar vibes to the Tom Brady deal that eventually saw him leave the Patriots as a free agent.

What does the new contract mean for Aaron Rodgers and the Green Bay Packers?

Rodgers hasn’t really made any more money out of the new deal – it did save the Packers around €10m in cap space this year, but the biggest takeaway is that the new contract voids on the seventh day prior to the 2023 season.

That specific day has been chosen as it prevents him from being franchise-tagged, so at things stand he’s poised to become a true free agent ahead of the 2023 NFL season.

Does that mean he’ll stay in Green Bay for at least two more years?

This is a harder question to answer, and when you consider the fractured relationship and fact that the Packers will want to get something back in return, the answer to that is probably no.

The current odds have it at -300 NOT to be the Green Bay QB at the start of the 2022 season, while he’s +200 to still be around so that suggests he will leave after this year.

In many ways that makes sense as it buys the franchise more time to plan ahead, and it also means they can get some picks in return if he’s traded once the season ends.

If he’s traded before June 1, 2022 then Green Bay needs to eat a cap hit of almost $27m so that will also be factored into things, but it certainly means there will be intense speculation throughout the year.

Where will Aaron Rodgers go next?

The Denver Broncos are often tipped as the most likely destination, they don’t really have their QB situation sorted out and they managed to get some final great years out of Peyton Manning so there may be some parallels there that would appeal to Rodgers.

The Raiders could be another interesting landing spot as it does look like they’ll forever be stuck around 8-8 (maybe 9-8 with the extra game} with Derek Carr under center.

It could all come down to how badly things have deteriorated with the Packers and the relationship behind the scenes, but if he’s genuinely hell-bent on revenge and Justin Fields doesn’t work out…. how about Chicago?