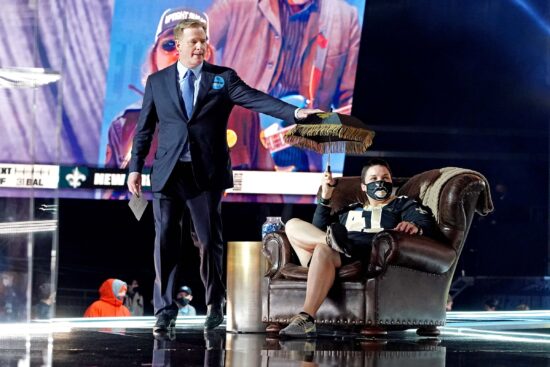 We’ve still got a few weeks left in the current season, but things are starting to take shape in terms of who’s going to be picking high in the NFL Draft, and which players are really starting to stand out as the top prospects in the College Game.

Everything always changes closer to draft time as stock rises and falls and QB’s will always rise in the mock drafts as needy teams desperately search for that next great signal-caller, but we do have a clear favorite to be taken 1st overall next year.

Which Player will be picked 1st in the 2022 NFL Draft? – Vegas Odds

With the Detroit Lions currently holding the number one draft spot, let’s take a look at what their current needs are. Since they are 0-8, they obviously have some fairly large holes that need to be filled. The Lions have their quarterback, Jared Goff under contract until 2025, so the quarterback position isn’t one that needs to be immediately addressed, so that eliminates Matt Corral, Malik Willis, and Carson Strong. The only two candidates left on the board are Evan Neal, an offensive tackle, and Kayvon Thibodeaux, a defensive end.

The Lions are averaging only 16.8 points per game while giving up 30.5 points per game. On the offensive side of the line, they have allowed their quarterbacks to be sacked a total of 23 times in just eight games. On the defensive side of the line, the Lions’ defense core has gotten to opposing quarterbacks just 14 times in eight games. While neither stat is great, at this point, I would expect to take the better all-around player available, even though they may have multiple needs to be addressed. With that being said, I can see the Detroit Lions drafting Kaybon Thibodeaux first overall in the 2022 NFL Draft.