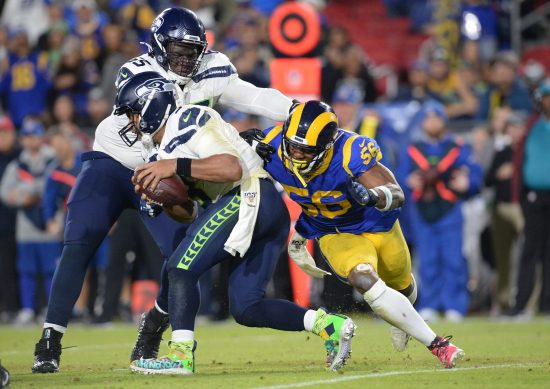 The Rams and the Seahawks will clash for the third time since the start of the campaign. Compared to the previous two games, this one has massive significance.

There aren’t many secrets between these two rivals, as they share the same division and know one another very well. LAR entered the playoffs in the last moment, beating the Cards on the road, while the Seahawks won the NFC West division, directly defeating the Rams two weeks ago.

This is a perfect chance for Sean McVay’s side, to avenge their previous failure. However, with their hot and cold performance, that’s going to be tough.

One note right away. We will write this preview as if Jared Goff plays, because his status for the match is still unclear.

The Rams’ QB has 20 touchdowns and 13 intercepted passes this year, which is unacceptable for a player of his caliber and contract as well. This is far below any projections, and it is no wonder why many see him as a potential problem in the Rams’ future.

Though, they forget that McVay didn’t have too many weapons for Goff, who had to rely upon wide receivers, in the absence of one prolific rusher. Cam Akers ran for 625 yards, and Dan Henderson Jr. had one fewer, but even though they present an excellent foundation for the future, especially Akers, this year, both of them were mediocre.

That can’t be said for Cooper Kupp and Robert Woods, who had 974 and 936 yards, respectively. Josh Reynolds and Tyler Higbee were also above 500 yards as well.

About the defense, there are no other words but superb. They allowed league-low 18.5 points per night, having Aaron Donald with 13.5 and Leonard Floyd with 10.5 sacks.

Rushers to Step Up and Play

Until the last few weeks, Russell Wilson was one of the front-runners for the MVP award. Now, even though he fell out of that race, Seattle’s superstar can explode at any moment and become the best player in the league. Seahawks’ QB has two 1,000+yard receivers, DK Metcalf 1,303 and Tyler Lockett with 1,054 yards. It is what allows him to explode even easier.

The guys who need to step up are running backs, who only recently showed their true face. Both Chris Carson and Carlos Hyde are having pretty poor seasons, combining barely above 1000 yards. But as we said, they showed signs of life in the last several matches, and Pete Carroll spoke about that.

If there is more help from these two, Wilson and the above-mentioned duo would have more chances to break the Rams’ superb defense.

Both teams won matches at their home during this season. Rams were better at the SoFi Stadium23-16, while Seahawks trashed the rivals at home, 20-9.

With the line for the total number of points sitting at 43, our hunch suggests this is a game for Under. As you saw, neither of those two games saw 40+ points, and that won’t happen on Saturday as well.

Bad weather is expected, and when combining that with the Rams’ poor attack and their good defense, fewer than 43 points sounds pretty realistic,