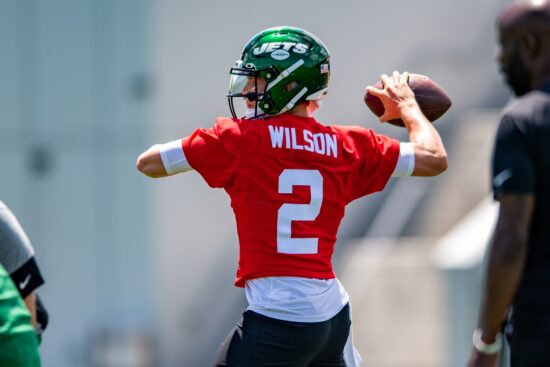 With Zach Wilson inking a contract with the New York Jets, all 32 first-round picks of the 2021 NFL Draft are now under a rookie deal. The reason why we had to wait slightly longer than expected to see the no.2 overall get his contract is that Wilson’s agents had certain issues with the deal the Jets had put on the table.

The two parties have managed to straighten things out since and Wilson is now officially a Jet! By putting his signature on the paper, the 21-year-old has agreed to stay in New York for four years, receiving a $35.1 million salary over that period.

Furthermore, Wilson will also get another $22.9 million to his bank account within the next two weeks in the form of a signing bonus.

The Jets are coming off a disastrous season that saw them finish with a 2-14 record. This season, the fans’ expectations are higher and the main reason for that is that they drafted one of the hottest prospects in the world of football – Zach Wilson.

The Jets’ resurgence story had only started when a problem surfaced. Their new quarterback was not pleased with the deal the Jets put on the table. This led to Wilson missing the first day of the training camp, causing everyone to panic.

As the Jets are practically putting all their hopes in Wilson – evident from the fact that they didn’t sign any experienced QB as his backup – the team got concerned that the deal may fail.

The contract dispute on the relation Wilson-Jets has come to the conclusion on Thursday after both parties made some compromises. The Jets agreed to pay Wilson’s signing bonus (within the next 15 days), while the quarterback okayed the adding of offset language into his contract.

After inking his Jets rookie deal, Zach Wilson has arrived in the training camp. The Jets will have another 20 practices, as well as three pre-season games to get the new quarterback ready for the 2021 season. They start the new season in Charlotte on September 12 against the Carolina Panthers.

The Jets Putting their Hopes in the BYU Product

Wilson was the #2 overall pick in 2021, coming just behind Trevor Lawrence, the new Jacksonville Jaguars quarterback. He got on the radar of NFL scouts after spending three impressive seasons with the BYU Cougars.

As a true freshman, Wilson made seven starts in 2018, one of which was in the Famous Idaho Potato Bowl, which saw the QB completing all of his 18 passes, leading his team to four touchdowns. For his performance in that game, he was crowned the bowl’s MVP.

A similar story happened in his sophomore season – Wilson started nine games, establishing himself as the school’s key player. He earned his second MVP award that year. This time, it was the 2019 Hawaii Bowl.

In 2020, Wilson’s career really took off. We saw him breaking BYU’s record for the highest completion percentage (73.5%), as well as receiving the offensive MVP award at the 2020 Boca Raton Bowl.

With such an impressive portfolio, everyone knew Wilson was going to have plenty of suitors in the NFL. The Jets were the ones to pick him in the draft, which came as no surprise to anyone.

This team was in dire need of a new quarterback, the proof being that in 2020, they scored only 243 points in 16 games. That’s 63 points fewer than the Jaguars, the team with the second-worse offensive record last year.

Oddsmakers Don’t Expect Much from Wilson and the Jets

Online sportsbooks can see a better future for the New York Jets. Last season, they recorded only two wins; this season, oddsmakers expect them to win a few more. At the moment, the New York Jets win margin is set to 6.5 games.

It’s a drastic difference compared to the previous season, but it can be easily explained. For starters, the 2021 season will have 17 matches, one more than the previous one. Secondly, the New York Jets schedule doesn’t seem as ugly as it was last year.

Finally, this time they have a much better roster than before, with a young quarterback who’s expected to shine in the future. Actually, even in his rookie season, Wilson is expected to do well. The odds for him passing for 22 or more touchdowns are currently -110.