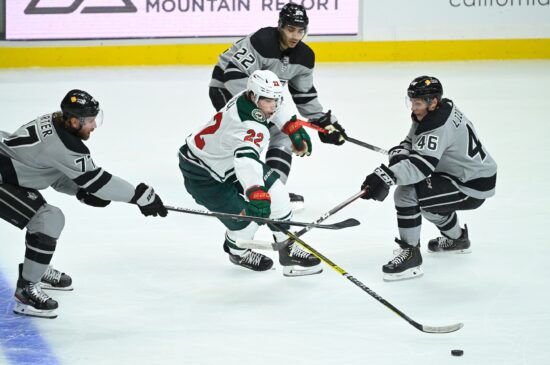 This game and their mini two game series should be interesting because both teams are not fully healthy yet to start off the season but still have the chance to create a thrilling game which kicks off on Tuesday night.

Any team could start out 0-2, it’s the NHL anything is unpredictable, but the way it happened to the Kings could stick with them for a long time. Against the Wild, they lost both games 3-4, both in overtime, despite having a two goal lead at the start of the third period in each game. Not only this, but in just their last game, the Kings gave up a goal with only two seconds left on the clock allowing the Wild to tie it and drag the game into overtime where they eventually scored the game winner.

Now the Kings need to desperately need to regroup because their competition doesn’t get any easier against the Avalanche. Still, they have shown they can put the puck in the net to build early leads.

Left Wing Andreas Athanasiou has scored a goal in each game so far while Center Jeff Carter has been averaging over an assist per game so far and leads the Kings in points as a result. What I would say to bettors on the Kings is not to panic so much due to their last two games and that they are two complete third periods away from being 2-0 right now.

After a dismal 1-4 loss to the St. Louis Blues to open up the season, Colorado proved to be why many are calling them this year’s Stanley Cup favorite by rebounding with an 8-0 shutout win against the Blues just two days later.

Andre Burakovsky leads this team in points with two goals and an assist, but what I like about this Avalanche team is that they have multiple goal-scoring options.

Naturally in an 8-0 blowout you will have multiple goal-scorers but seven different Avalanche players got on the score sheet in this one. Maybe it was just the fact that the Blues defense had just given up after going down 4-0, but regardless of the fact, it also showed just how good this Avalanche attack can really be with just two games under their belt.

This game will be closer than a lot of people think. The Kings will be looking for retribution after their unfortunate start to the year and proved they can build a lead in the first period where the Avalanche have yet to do so despite their blowout win.

We look for this game to remain tied midway through the second before Colorado eventually pulls away late.