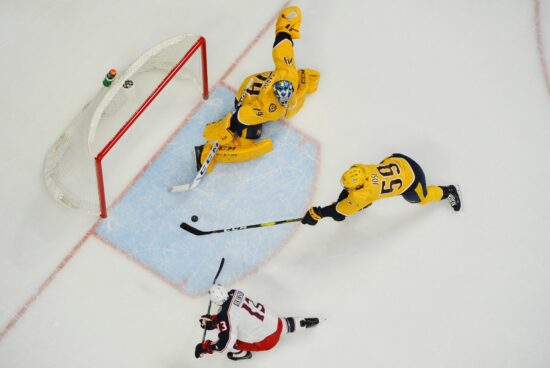 In the 2021 NHL season, the Columbus Blue Jackets will be competing in the Central Division, along with seven other teams, one of which is the Nashville Predators. The season opener will be the first time these two met in almost a year. The most recent Blue Jackets vs Predators game happened last February when Nashville won in the overtime (4-3).

Oddsmakers think the Nashville Predators are going to do something similar on Thursday evening. Nashville odds suggest this team is the favorite, although the Blue Jackets definitely have the power to make the game interesting until the end.

Even though the COVID-19 protocols in Tennessee allow for a limited capacity at sports events, the Nashville Predators will have no supporters in the season opener. There will be no fans in the stands of Bridgestone Arena during the Blue Jackets vs Predators game.

Still, this doesn’t seem like a big problem for the Predators, a team that did better on the road last season than in Nashville. They were the 3rd-best team in the Western Conference when away performances are concerned, with 14-4-4-12.

Predators Looking to Improve the Offense

John Hynes’ boys are going into the Blue Jackets vs Predators game as slight favorites. However, in order to win, they need to score goals. However, goal-scoring is something their boss doesn’t seem too satisfied with.

Although they did alright in the regular season, in the Cup Qualifiers we saw the Predators scoring a total of 11 goals in the four games against the Arizona Cardinals. That’s under 3 goals per game, which wasn’t enough for Nashville to advance to the next stage.

This year, their ambitions are bigger. The men they’re putting their hopes in are centers Ryan Johansen and Matt Duchene. Still, two players don’t make up a team – Johansen and Duchene will need help from their teammates.

The trouble is that forwards Craig Smith and Nick Bonino have moved to the Boston Bruins and Minnesota Wild, respectively. The two were among the crucial players in John Hynes’ team last season, especially when it came to scoring, with 18 goals each.

In 2021, the offense seems like their main worry. However, there are still some questions about their defense that need to be answered. The main one is who’s going to be their goalie – Pekka Rinne or Juuse Saros?

Pekka Rinne, now a 38-year-old, has been with the Nashville Predators since 2004. He is their leader in wins and shutouts, and is one of only 12 goalies to score a goal in the NHL. He’s also a four-time NHL All-Star, as well as a recipient of the Vezina Trophy (best goaltender award).

However, Rinne played only 36 games, all of which were regular-season games. In all four Playoff games the Nashville Predators played in 2020, their goaltender was Juuse Saros.

Although the Blue Jackets didn’t achieve much in 2020, that season will be remembered in Columbus for the emergence of Pierre-Luc Dubois. The 22-year-old is one of the hottest prospects in the NHL, with a long list of clubs hoping to get his signature in the future. But, for the time being, he’s playing for the Blue Jackets.

The reason behind all the hype about Dubious is that he was the best player in Columbus in the regular season, with 49 points (18 goals and 31 assists). He also did fairly well in the postseason, getting 10 points (4 goals, 6 assists) in 10 games. Many believe the promising center can go only upwards from there.

All considered, this should be a very close game. Both teams have their strengths and weaknesses, so neither Columbus nor Nashville should be thought of as favorites. That said, it wouldn’t be a major surprise if we saw the Blue Jackets vs Predators going into overtime.