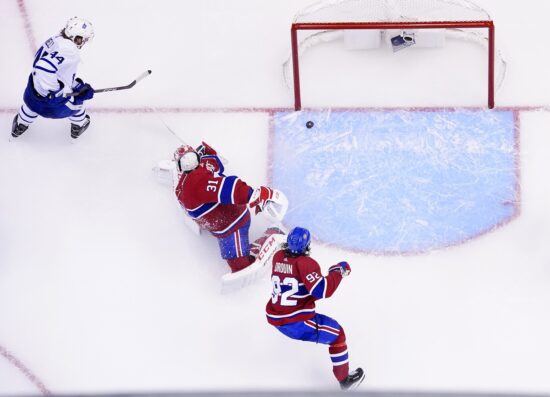 On the first day of the 2021 NHL season, we’ll see two old rivals reigniting the rivalry – Montreal Canadiens vs Toronto Maple Leafs. Both teams have high hopes for the new season, with oddsmakers making them the two biggest favorites for winning the North Division.

Ahead of the season start, the Maple Leafs are the top favorites, with the +125 odds for winning the North. Just behind Toronto are the Habs with +450. Speaking of odds, they favor Toronto to win the Canadiens vs Maple Leafs game on Wednesday.

The Canadiens vs Maple Leafs is one of the biggest rivalries in hockey. It’s also one of the oldest rivalries in North American sports, played between the two oldest ice hockey clubs in the NHL. Both teams were formed in the early 20th century and the first-ever Montreal vs Toronto happened in 1917.

In 2021, due to the COVID-19 protocols set by the Government of Canada, the NHL teams from this country aren’t going to be allowed to travel over the border. At least not in the regular season.

What this means is that Montreal Canadiens and Toronto Maple Leafs are going to play all of their games in Canada. This also means that in 2021, we’re going to see (at least) ten Montreal vs Toronto games.

The Maple Leafs Putting Their Hopes Into Their Offense

Last season, Toronto finished in 8th place in the Eastern Conference, with a .579 percentage after 70 games played. Their strongest weapon in 2020 was their attack. The Maple Leafs scored a total of 238 goals that season, which was fewer than only two other teams in the entire league (Tampa Bay Lightning and Washington Capitals).

More than 20% of all Toronto’s goals that season were scored by their forward Auston Matthews. With 47 goals, he was just a goal behind Alex Ovechkin who won the Maurice “Rocket” Richard Trophy.

Matthews is expected to be one of Toronto’s crucial men this season as well. The same goes for Mitch Marner, who was their top assist-maker in the regular season.

The Maple Leafs were superb in the offense, but protecting their goal wasn’t something they had a lot of success with. In fact, with 227 goals conceded, they were the 5th-worst team in the Eastern Conference when defending is concerned.

Odds Favor Toronto to Win Their First Game of the Season

In the 2019-20 season, the Canadiens finished a few spots below their fiercest rivals. They weren’t as impressive as Toronto when the offense is concerned, but they did better defense-wise. Montreal conceded 221 goals, which is a pretty good achievement, especially knowing that they played 71 games (more than most other NHL teams).

They did concede four goals the last time they played Toronto. However, in most games in 2020, they conceded fewer. In fact, the most goals they conceded in a game that year was five. It happened in February when the New York Rangers beat them 5-2.

The Habs are good in the defense; the Maple Leafs are brilliant in the attack. At least that’s what we know from the previous season. As this is the first game of the new season, we can’t say for sure how these teams are going to play. Still, judging by their previous matchups, the Canadiens vs Maple Leafs is going to be a close one.

Toronto enters the game as the favorite, but Montreal is likely to give them a run for their money. Even if the Maple Leafs win, they’re not going to do it with a large margin. We might even see the game being decided in overtime.