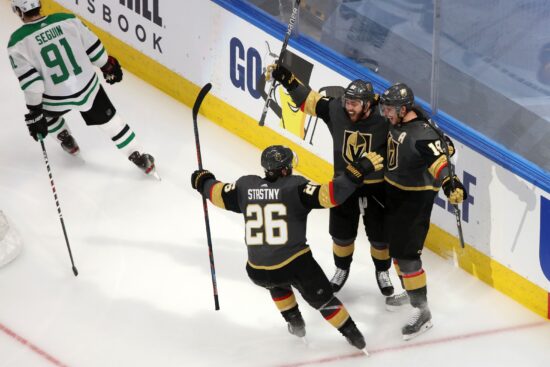 Two teams set to get very familiar with each other meet up Monday night in Sin City. The Arizona Coyotes and Vegas Golden Knights will face off with each other four times in the upcoming week as part of a two series back-to-back as part of the NHL’s initiative to limit travel during this shortened season.

Arizona Off to Solid Start

Arizona opened their season at San Jose, which even without fans is a tough spot to go in and get a win. The Coyotes ended up dropping the opener to the Sharks 4-3 but in OT, and bounced back with a 5-3 win on Saturday making it a very successful 1-0-1 trip.

The Coyotes came out firing with 37 shots in the season opener, including 19 in the third period alone. They reeled things back a bit in game two, which worked to perfection netting 5 of 26. Vegas usually runs a faster paced tempo, which suits Arizona well as they’ve played in both style of games this season. Phil Kessel does look rejuvenated with 3 goals already in two games.

Darcy Kuemper is expected to be in net on Monday night, hoping that his defense adds a little more resistance than they did in his season debut. Kuemper faced 35 Sharks shots last Thursday, and played fairly well in stopping all but three of them. Antti Raanta started on Saturday, stopping 3 of 34 shots.

Vegas Ready to Fire Away

The Golden Knights will obviously get their opportunities tonight as Arizona is allowing 34+ SOG through their first two games. Vegas also gets the advantage of facing a Coyotes team that is missing Oliver Ekman-Larsson, a defenseman who left the last game with the Sharks after dishing out 3 assists.

Vegas had their share of struggles in what should have been a relaxing opening series at home vs. Anaheim. The Golden Knights’ 5-2 win in the season opener is misleading, as it took three 3rd period goals to get to that spot. Vegas also eked out a 2-1 win in extra time vs. Anaheim on Saturday. That game only got to OT after a late William Karlsson goal with under 2 minutes left.

It doesn’t matter how you get there, and Vegas is still 2-0 on the season. Max Pacioretty has a couple scores already and Mark Stone has 3 assists in two games. The Golden Knights also have the best goaltending tandem in the league with Robin Lehner (2.00 GAA) and Marc-Andre Fleury (1.00 GAA) off to solid starts.

Hard to not like the Golden Knights in this one, and they are lofty -200 favorites. Vegas should be able to net plenty of pucks against a shorthanded Arizona defense and has the goaltending to get them the puck line win here.