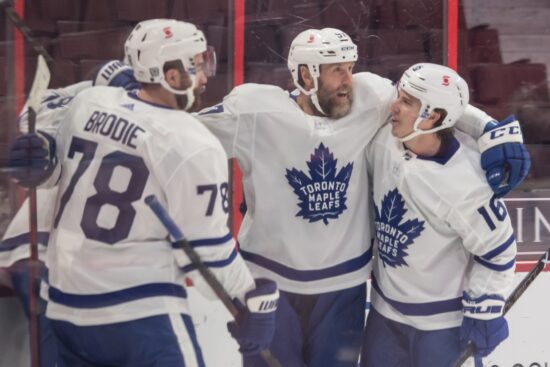 It’s not the quality of play that has the Winnipeg Jets concerned early in their 2021 season, it’s the quantity. The Jets lace up the skates for just the second time this season when they visit the Toronto Maple Leafs, a team who is already 2-1 on this young season.

Jets Ready to Turn Up Offense?

Winnipeg has had a 3-day break and some pauses in practice time for possible COVID exposure, but they did look good in their only game so far this year, a 4-3 OT win over Calgary. The Jets got a three point night from star Patrik Laine right out of the gate with two scores while Kyle Connor also added a goal and two assists.

The sample size is very small for Winnipeg, but if they manage another 34 SOG like they did last Thursday against Calgary it could be a very fruitful night. Toronto seems to be content on winning games in high scoring affairs this season, as the Jets get a defense that allowed 9 goals in their first two games.

Of course, Winnipeg’s net minder Connor Hellebuyck can’t be completely thrilled with his performance to start the season either. There was some expected first game rust as Hellebuyck allowed 3 goals on 26 shots vs. the Flames. He better get real good, real fast ahead of a matchup with a Toronto offense that is as dangerous as any in hockey.

Toronto Set to Get in a Groove?

The rest of the NHL was put on alert on Saturday as Toronto’s new top line seemed to have put things all together. Auston Matthews (goal, 2 assists), Mitch Marner (goal, 2 assists), and Joe Thornton (goal) combined for all the team’s scoring in a 3-2 win over Ottawa.

Nobody knows how the 41-year-old Thornton will integrate with this Maple Leafs team, but he provided the chemistry and leadership that Toronto brass was expecting in just his third game with the team. With John Tavares off to a hot start leading the 2nd line (2 goals, 3 assists in three games), and William Nylander netting two scores already this looks like a Leafs team that can score at will.

Of course part of playing winning hockey is also not allowing the opponent to score at will either. That’s what Frederik Andersen has done in allowing 4 goals on 32 shots to Montreal in the opener and 5 goals on just 24 attempts to lowly Ottawa in his second start. Sheldon Keefe turned to Jack Campbell almost out of necessity on Saturday, but he also served up 2 goals while facing only 19 shots.

Keefe will likely turn back to Andersen on Monday night, and you just can’t back a team starting a 4.47 GAA goaltender with a .839 save percentage until he starts to prove something. Winnipeg has played sparingly, but that also means they’re rested and energized.