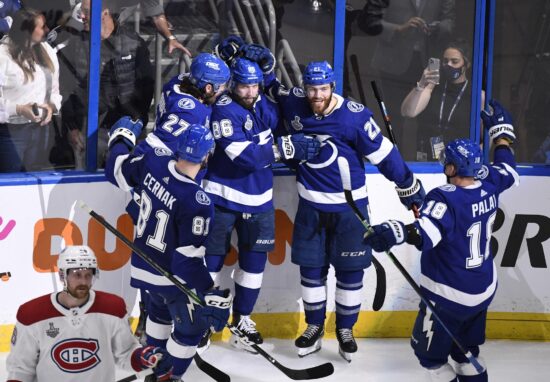 The Stanley Cup Finals got underway on Monday evening, as Tampa Bay Lightning began the defense of their iconic trophy. Montreal Canadiens are the outsiders in the betting to win the Finals, and they very much looked like the unfancied side that they were in the betting in game one.

Nikita Kucherov was once again the star for the Lightning, as his excellent postseason continued with a piece of history on Monday evening. The Lightning star joined illustrious company by scoring 30+ plus points in a third consecutive playoff season. The score means that he joins greats such as Mario Lemieux and Wayne Gretzky. His captain, Steven Stamkos, later claimed that his teammate is one of the ‘best players in the world’.

It would be hard to argue with that statement based on the form he has shown throughout the playoffs so far this season. Kucherov was at the heart of everything good that the Lightning did in game one of the Stanley Cup finals, as he scored twice and also recorded one assist. The 28-year-old has now scored seven goals and made 23 assists in the 19 games that he has played in the playoffs this season. Throughout his career, he has played 109 games in the playoffs, scoring 43 and making 82 assists to contribute a remarkable 125 points.

For large periods, the game didn’t feel like a 5-1 outcome, as the Lightning scored three of their goals in the final period. However, fans at the Amalie Arena didn’t have to wait long to see their team go ahead. Tampa took the lead inside seven minutes when Erik Cernak fired past Carey Price in the Montreal goal. It was the perfect start and settled any nerves that the Lightning players may have had.

Tampa extended their advantage in the second period, as Yanni Gourde scored his sixth goal of the playoffs this season. If it weren’t for Price, the advantage could have been greater than it was. The Montreal stopper is already among the leading contenders to win the Conn Smythe Trophy this season. However, the Habs were able to get a foothold in the game before the start of the final period, through an unlikely source. Ben Chiarot hadn’t scored in 51 playoff appearances before game one of the finals, but he rattled in his effort to keep the Habs within one.

The game was taken away from the Habs in the final period, as Kucherov struck twice and there was also one for Steven Stamkos. Fans didn’t see much drama in the closing stages of the Stanley Cup finals opening game, but the series continues on Wednesday evening, as the two sides meet once again at Amalie Arena. Montreal will be hoping for better, while the Lightning could take a firm grasp on the Stanley Cup with a victory.