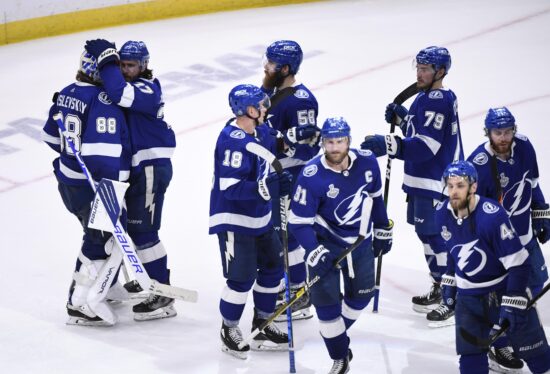 Tampa Bay Lightning have moved into a dominant position in the Stanley Cup Finals, as they now boast a 2-0 lead over the Montreal Canadiens after a 3-1 success on Wednesday. It was a closer affair, but the defeat now means that the Habs must win both games in Montreal on Friday and Monday to get back into their first Stanley Cup Finals series in nearly 30 years.

It was a much closer affair on Wednesday evening, as the Habs gave it a proper go in the opening period. On another night, the Canadiens could have gone into the second period with a one or two-goal lead. However, they found Lightning stopper Andrei Vasillevskiy in inspired form. The goaltender was able to deal with everything that the Habs through at him, and completed the game having made 43 saves. That meant that he ended game two with a save percentage of .977.

After a goalless opening period, the deadlock was finally broken in the second, as Anthony Cirelli found the back of the net in Tampa. However, the lead didn’t last that long, as the Canadiens finally found a way past Vasillevskiy just a couple of minutes later. Nick Suzuki was the player to score the goal for the Habs, which was his sixth goal in 19 playoff games this season. However, the moment of magic in the game came courtesy of Blake Coleman.

The Lightning star somehow managed to redirect a pass to score with one hand with just a second remaining on the clock in the second period. The moment would ultimately be decisive, as the Habs looked to give in to the inevitable in the final frame.

The game looked to be petering out in the final period. However, there was still time for the Lightning to ensure that there would be no memorable comeback in game two with just under five minutes remaining. Ondrej Palat scored the final goal of the game after a turnover on a Canadiens attack. The goal was a kick in the teeth for the Habs, who looked to be building momentum before the puck hit the back of the net.

Montreal now find themselves in an extremely difficult position, as they must win game three to realistically stand any chance of getting back into the series. The odds certainly illustrate the size of the task that the Habs have in front of them. They have now drifted to +900 to win the Stanley Cup Finals series. Meanwhile, the Lightning are rock-solid favorites in the betting, as they are priced at -2000 to win the Stanley Cup for the second year in a row.

The series moves to Montreal for game three, as Centre Bell will host the next game between the sides on Friday evening.