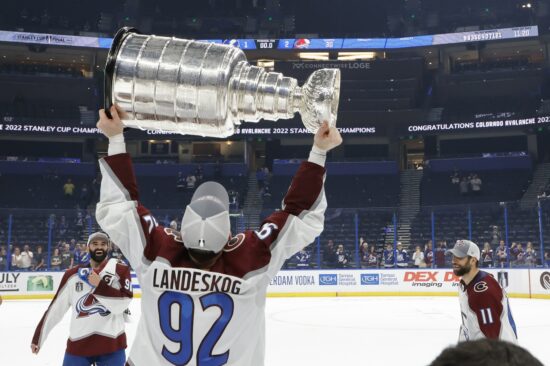 It’s finally the end of another dramatic NHL season, with the Colorado Avalanche claiming a third success in franchise history. The Avalanche finally got over the line in game six of the series on Sunday evening, as they avoided a game seven shootout with a 2-1 victory at Amalie Arena over the Tampa Bay Lightning. The Stanley Cup 2022-23 odds have already been released, and you can find the latest prices below.

There are few surprises to see the Colorado Avalanche lead the betting to win the Stanley Cup in 2022-23. The Avalanche were the dominant force in the Western Conference throughout the previous season, and their run to the finals never appeared to be in doubt. They completed two sweeps to reach the finals, and while they were put to the test by the Tampa Bay Lightning, it always looked as though they had the measure of their opponents.

However, history does suggest that successfully defending the title isn’t always as easy as the odds would make out. The Tampa Bay Lightning have been an exception to that rule in recent seasons and were within two periods of forcing a game seven this year, and a shot of making history with a third success. But, the Avalanche squad is a young outfit, and this season’s experience does make them an outstanding chance.

The Eastern Conference was wide-open throughout the playoffs, and it wasn’t without its shocks. The majority of which were inflicted by the Tampa Bay Lightning, who eliminated both the Toronto Maple Leafs and Florida Panthers in the opening two rounds. However, we would stop short in believing that the previous champions are the best value at the current prices, as their dominant sequence in the post-season now appears to have come to an end.

There are few teams that look set for renewed bids in 2022-23, including the New York Islands. We would be slightly keen to fade the Maple Leafs at such a short price, as they failed to make it past the opening round of the playoffs once again this season. The Florida Panthers look a solid chance if they can build on their regular-season form in the playoffs, as they finished top of the Eastern Conference having gone 58-18-6.

It is extremely early to be making a pick on the Stanley Cup next year, but we do like the value of the Panthers at the current prices. They will likely drop in price as soon as the season gets underway, which means that getting their current price could be a good value selection.