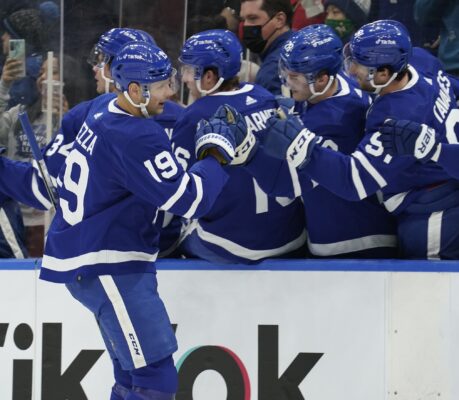 The NHL action is heating up, and so is the outright betting for the Stanley Cup in 2022. There have been no shortage of market movers since the start of the season, including the Toronto Maple Leafs, who have been cut to +650 from +1400 to win their first Stanley Cup title since 1967.

Colorado Avalanche are still seen as a joint favorite, but this does indicate that Toronto are growing stronger as the season goes on.

The Toronto Maple Leafs have shortened in the betting drastically since the start of the season, and are now as low as +650. They began the season as a +1400 chance in the betting, which means that gamblers could have potentially lost their best chance on a famous success for the Leafs next year. However, fans will not be carried away with the dream of winning a first Stanley Cup since 1967, as the post-season has proven particularly troublesome for the franchise in recent seasons.

That was evident once again in the playoffs last season, as they were knocked out in the first round by the Montreal Canadiens after seven games. Regardless, their form so far this season has been strong enough to justify favoritism, as they have won 17 of the 24 games that they have played. They have suffered the second-fewest overall defeats in the Atlantic Division, and also have the best defensive record in the division. However, sustaining that form will be the biggest challenge that they face between now and the Stanley Cup finals.

The Colorado Avalanche were as short as +475 in the betting just a couple of months ago, as many believed that they were the franchise to beat this season. However, few would have been tempted by that short price. Now, they seem a more popular betting selection, as gamblers will be able to get higher returns on any potential wager. The Avalanche have been consistent throughout the season to this point but currently sit down in fourth in the Central Division. They have won 12 of the 20 games that they have played, which includes eight wins in their ten most recent fixtures in the NHL.

The biggest drifter in the market has been the New York Islanders, as they were +1600 just a couple of months ago. Many sportsbooks can’t give them away now, as they have drifted to a huge +6600 in the betting. The main reason for that is the poor form that they have shown since the start of the season. New York are at the bottom of the Metropolitan Division and have scored just 33 goals in the 18 games that they have played. That is the worst attacking record in the Eastern Conference, and they are also on a nine-game losing run at present.