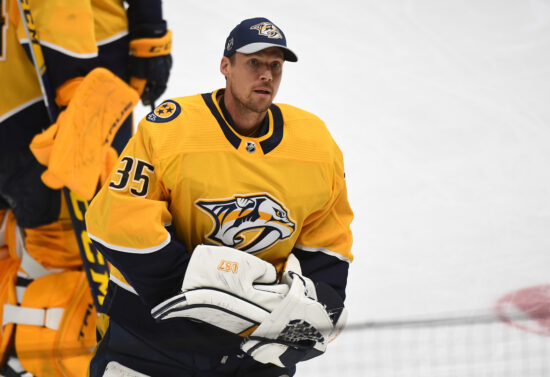 There was a sad piece of news in the NHL this past weekend, as it was announced by Pekka Rinne that he would be retiring from the sport with immediate effect. The Finnish goaltender quickly became one of the best players in his position after being drafted into the NHL by the Nashville Predators, where he stayed for 15 years.

Rinne Drafted By Predators In 2004

Rinne was drafted into the NHL back in 2004 as a 258th pick overall by the Nashville Predators. It could be argued that selecting the Finn may have been one of the best decisions that the franchise has ever made. Rinne needed to wait for his moment in the NHL, as he became the starting goaltender in the 2008-09 season.

Rinne’s Route To The Top

Rinne’s breakthrough campaign with the Predators came in the 2008-09 season, as he played 58 times during the regular season. He was on the winning side 29 times and lost just 15 times. During the following season, he also played in the playoffs for the first time. He played six times as the Predators fell short in the post-season.

The goaltender’s best run with the Predators came in the 2016-17 season, as he played 22 times and was on the winning side on 14 occasions. He had a save percentage of .930 during that run, but the Predators were eventually beaten in the Stanley Cup Finals by the Pittsburgh Penguins. That would be the closest that he would come to get his hands on the famous trophy. During his career, he played 89 times in the playoffs and won on 45 occasions. He averaged a save percentage of .913, which was slightly lower than his average in the regular season.

Rinne would also represent Finland throughout his career. He played in the World Cup on five occasions, averaging a save percentage of .926. He picked up a silver medal with his national side in the 2014 World Championships, as Russia edged out Finland in a tense final.