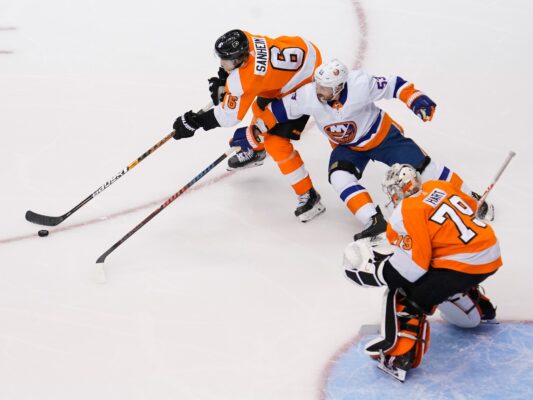 It seems like forever ago when the NHL finally decided to resume their season much like NBA and it was the two leagues creating a bubble format for their playoffs with the NHL determining their seeding using a round robin type of gameplay. This saw the Tampa Bay Lightning beat out the Dallas Stars in six games for the Stanley Cup.

This game finished at the end of September but the Penguins have been done since August and the Flyers have been out of hockey since the start of September. Now in a quick turnaround offseason, these historic squads will meet up Wednesday night to kickoff the 2021 NHL season.

The Penguins saw their season come to an end uncharacteristically in the first round of the playoffs last year losing to the Canadiens in four games. Now they are out to prove that their run as a yearly title contender is certainly not over with a squad that has some old faces mixed in with new ones.

Obviously when you talk about the Penguins you have to mention Sydney Crosby. The Pittsburgh Captain is now 33 and only had 16 goals to his name last season but still managed to do what he does best and land in the point column with 47. Alongside him will be the usual suspects Evgeni Malkin and Chris Letang as these three have been a solid core for this team for many years.

However what is different is the fact that for the first time in over 10 season that Marc-Andre Fleury will not be in goal for the Penguins. This means that 25-year-old Tristan Jarry will have large shoes to fill but he still finished with a .921 save percentage and has been in the Penguins system for four seasons now so he should be familiarized enough to make the lead to starting goaltender.

The Flyers were the favorite to win the Stanley Cup last season and rightfully so coming in as the number one seed but as with everything in playoff hockey, the odds can always shift out of your favor in a moment. This is what happened when they got upset by the sixth seeded New York Islanders in the second round. However they are poised to make another run at it starting Wednesday.

The Flyers also have a young goalie in 22-year-old Carter Hart who actually played in 40 games last year with a .920 save percentage. However what will be most interesting for this team is whether or not Nolan Patrick can play a full season as he was out all last year with migraines but says he “feels good” to go for Wednesdays game.

I am going with the Flyers in this one purely based off of them having someone experienced behind net after a full season albeit three years younger than the Pittsburgh goaltender. Also we have nothing to go on yet for this game except based on what happened last season so it is still too early to tell if the Penguins really just had a fluke year and will be back versus the Flyers who look ready to grab a number one seed again with their first game at home.