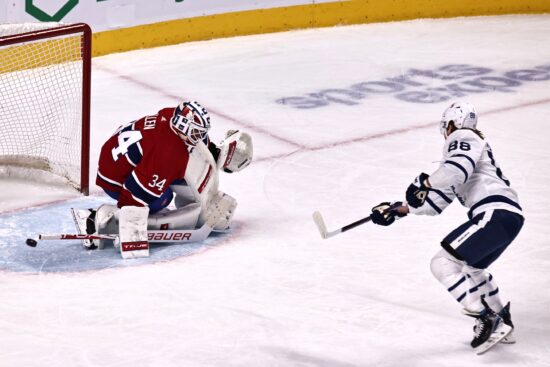 A couple of teams playing well down the stretch meet up when the Montreal Canadiens visit the Toronto Maple Leafs on Thursday night. These two squads have combined to win 9 of their last 11, with both destined for the postseason. Toronto has already clinched their playoff berth, but the current 4 seed Montreal hasn’t yet. Does that make the ‘Leafs a dangerous wager as -200 favorites?

Montreal at a Fatigue Disadvantage

There are a couple major reasons why Toronto is a gigantic favorite despite both teams playing well lately. The first is the fact that the Maple Leafs are at home, where they are a very respectable 16-7-3 on the season. The main disadvantage for Montreal though is that they’ll be playing on the short turnaround, meanwhile the Leafs have had two nights of rest.

Yes it wasn’t pretty in the Canadiens’ 5-1 loss in Ottawa on Wednesday night. The Senators have scored points in 8 of their last 10, and Montreal still seemed postseasound bound (99.3%) as they hold a 10 point lead over Calgary with just four games to play.

What the back-to-back does do is burn up Canadiens starting goaltender Jake Allen. He’s been shaky with 4+ goals allowed in two of his last four starts, and with Carey Price sidelined with a concussion Montreal likely turns to Cayden Primeau making his third start of the season.

The Maple Leafs offense is ranked 4th in the NHL in goals/game, and get to face a third-stringer that has played in four career games. Throw in the fact that Primeau has a defense on 0 days rest playing in front of him and things could get ugly in Toronto’s favor on Thursday.

The last time the Maple Leafs took the ice was a 3-2 OT loss in Montreal on Monday. The series has been somewhat competitive with Toronto taking five W’s and the Canadiens three. Monday’s loss broke a 5-game win streak overall for the ‘Leafs, a span in which they outscored opponents 22-7.

Unlike his counterpart at the other end of the ice, Jack Campbell will have a fresh defense in front of him as the Leafs have had the last two nights off. The Leafs have scored points in six straight Campbell starts (4-0-2) and he has given up 1 goal in each of his last three wins.

Who wins the Canadiens vs Maple Leafs game tonight:

Toronto has taken 5 of 8 from Montreal this season, but do the ‘Leafs get complacent with really nothing left to play for? Toronto is 6 points up on Edmonton in the North division – which is comfortable – but you’d think the Leafs don’t relax until they officially clinch. With the Canadiens being on the short turnaround, it’s looking like Toronto in a landslide.