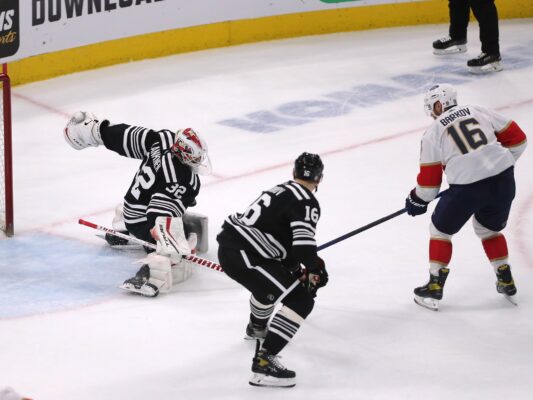 Over the past two weeks, the Blackhawks have lost four of the five games they played, although one of those losses happened after overtime. The game in question is the Panthers vs Blackhawks match-up played on Thursday evening. The two meet once again (the last time in the regular season), and the Blackhawks need a win to keep their playoff dream alive.

Blackhawks in Need of Points ASAP

Chicago is six points behind Nashville and four behind Dallas. These two teams meet tonight, so the outcome of that game can have a huge impact on how the playoff race unveils.

Nevertheless, regardless of what happens in the Stars vs. Predators game, the Blackhawks need to win.

There are only six games left for the Blackhawks to play, so if they want to win a lot of points. The trouble is that their form has been horrible.

They won only three points in the previous five games, which has almost completely ruined their chances to qualify for the postseason.

But, there’s still some hope for them, which could vanish entirely if they lose to the Panthers once again. Chicago has a decent roster, although there are at least five players who will miss this game. Still, most of their key men are fit and ready to give their utmost.

The man in the spotlight is Patrick Kane, who’s been Chicago’s, by far, the best player this season. He’s made 46 assists, together with 15 goals, which makes him not only one of the best forwards in the division but in the entire league.

He’s made three assists in the past five games, but for Chicago to remain in the playoff race, he’ll have to do much, much better.

Panthers With a Chance to Win the Central Division

The Florida Panthers have achieved their main goal for 2021, which was to qualify for the playoffs. With 71 points, they’re currently in second place in the Central Division, and no matter what happens in the remainder of the season, they will not drop out of the top four.

Although their main focus at this point is the postseason, this team also has a chance to win the divisional title. They’re competing for the #1 spot with the Hurricanes and the Lightning.

Although their chance is not as good as the chances of those two, there’s one thing that makes the Panthers optimistic – they’ve been in a really good form lately.

This team won 15 points in the previous ten games. The brightest aspect of their play in those games was their attack.

The Panthers have been scoring a lot of goals lately. For example, on Tuesday against Nashville, they scored seven times, which is the highest number of goals they’ve scored in 2021.

Who wins the Panthers vs Blackhawks game tonight:

It’s going to be an entertaining encounter – Chicago needs points; Florida’s been fantastic in the offense. Anything can happen in this game, but one thing looks certain. We’ll probably see plenty of goals on both ends.