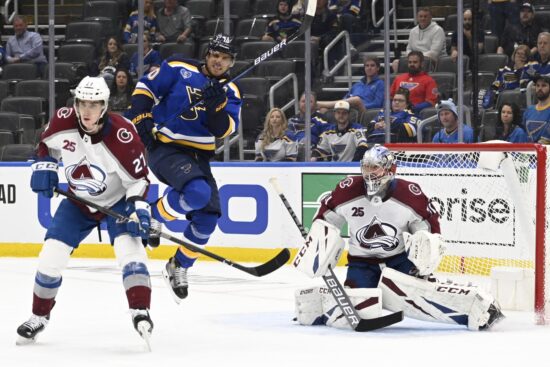 Game 4 of the best of 7 series will take place on Sunday afternoon between the Colorado Avalanche and St. Louis Blues. The Avalanche are in command as they have won all three games so far. The Blues are on the brink of elimination and have shown very few signs of life so far in the series. Colorado is once again a huge favorite to win this game, despite being on the road.

MacKinnon and Company on Fire

Nathan MacKinnon and his line have been absolutely outstanding in this series. The Avalanche top player scored three goals in the Game 2 win, and overall has five goals and two assists in this series. Capitan Gabriel Landeskog has been great as well, with a pair of assists in Games 1 and 2, and he added a third one in the Game 3 win. The Avalanche saw this line dominate all season long, which has pushed them to the top-scoring team in the NHL during the regular season.

Phillipp Grubauer is the netminder for the Colorado Avalanche, and overall in this series, he has allowed just five goals in three games. In the three wins, he has turned away 75 shots so far. His regular season was one of the best in the league, as he finished with 30 regular-season wins.

The St. Louis Blues just are not getting the job done. Without David Perron, they have struggled to score. The lone goal in Game 3 came short-handed, as Tyler Bozak got on the board. Vladimir Tarasenko has come back from various injuries and has yet to score a point. Captain Ryan O’Reilly is another goal that’s struggled. He was a -3 in both Game 1 and Game 2, but his assist in Game 3 made him even. He had just one shot on goal in the Game 3 loss.

Who wins the Avalanche vs Blues game tonight:

There are no signs of life that the St. Louis Blues are going to win a game in this series. Not only are they beat up with a ton of injuries, but they also seem like they are pretty lifeless. The home crowd won’t be able to help enough, and once the Avalanche get the lead, the walls are going to cave in for the Blues. Look for Colorado to skate away with an easy first-round series sweep.