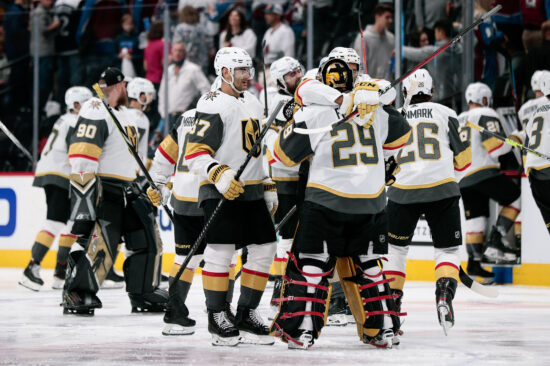 The first four games in the series between the Colorado Avalanche and Vegas Golden Knights went to the home team. That changed on Tuesday when Vegas tallied a 3-2 OT win in Denver, which game them a 3-2 series lead and the chance to close things out on Thursday night back at T-Mobile Arena. Oddsmakers have Vegas as -135 favorites to do just that, with the Avs a +115 underdog with their season on the line.

Do Or Die for Colorado

The Avalanche find themselves on the brink of elimination and have lost home ice advantage with the Game 5 loss at Ball Arena. Colorado had looked like Stanley Cup contenders for most of this postseason, including a 7-1 win in game 1 vs. the Golden Knights. That offense has been held in check the last three games though.

Colorado lives and dies with their top line, as evidenced by that 7-1 win in game 1 in which Nathan Mackinnon, Gabriel Landeskog, and Mikko Rantanen combined for 5 goals and 8 total points. Mackinnon doesn’t have a point the last three games though, while Rantanen and Landeskog have just 1 point the last two. Can Colorado survive if their big names aren’t producing?

Philipp Grubauer has also been decent but not great in net for the Avs. He gave up 3 goals on just 25 shots in Tuesday’s loss, and allowed 8 scores during the two games in Vegas this series (both losses) while getting pelted with 78 SOG.

Vegas Ready to Move On

The Golden Knights are in a great spot on Thursday night after stealing home ice advantage last time out. Peter DeBoer does not want to go back to Colorado for a decisive game 7, and would instead rather close things out at T-Mobile Arena where Vegas was 21-5-2 during the regular season.

It was Mark Stone that was the hero in game 5, slipping a puck past Grubauer just :50 seconds into OT to give Colorado their first home loss since March 27th – also against Vegas. The Golden Knights have now won three straight in the series, and are in a good spot after outscoring Colorado 8-3 in games 3 and 4 at T-Mobile Arena.

One thing to note about the Golden Knights’ 7-1 loss in game 1 is that it came with Robin Lehner in net. Marc-Andre Fleury rested that game after a grueling 7-game series with the Wild, but has returned to go 3-0-1 over the last 4 contests. Give credit to the entire Vegas defense, as they’ve held the high powered Avalanche offense to just 20, 18, and 30 shots over the last three games.

Colorado has to be deflated and frustrated after losing home ice advantage and having their offense sputter as of late. It’s going to be a wild atmosphere in Las Vegas on Thursday night, and that combined with Fleury’s effectiveness this series gives the Golden Knights the edge.