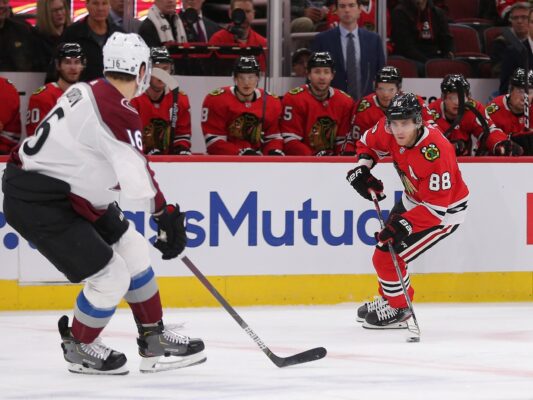 The Chicago Blackhawks and Colorado Avalanche begin their respective quests for the Stanley Cup when they get their 2021 seasons underway Wednesday night in Denver. Colorado is the favorite to hoist the Cup, but they’re dealt a blow in the season opener with Hart Memorial finalist Nathan Mackinnon out due to COVID protocols. The number is dropping on the Avs as a result, opening at -236 and down to -190.

Chicago fought for a possible playoff berth for a long time in the 2020/21 season but ultimately slipped down the stretch and finished 6th in the reorganized Central division last year. One of the Blackhawks’ biggest concerns was in net, with rookie Kevin Lankinen getting a bulk of the starts and the team finishing 25th in goals allowed (3.3).

Lankinen didn’t do badly in his first year in the pros (17-17, 2 SO’s, 3.01 GAA) but he’ll be in a backup role in 2021 after Chicago was able to acquire the reigning Vezina Trophy winner Marc-Andre Fleury from the Vegas Golden Knights. Fleury had six shutouts last season and his 1.98 GAA was the lowest of his career.

Chicago traded away fan-favorite defenseman Duncan Keith in the offseason, but they also made a draft day splash in signing former #4 overall pick and recent Olympic team assignee Seth Jones from the Blue Jackets. The addition of Jones, the return of Jonathan Toews after missing all of last year with health issues, coupled with the continued success of Patrick Kane (66 pts) and Alex Debrincat (56 pts) has the ‘Hawks optimistic for 2021 and opening night.

Are Avalanche Too Pricey Without Mackinnon?

Nathan Mackinnon finished 8th in the NHL in points last season finishing with 65 points. The reason he finished 3rd in Hart Memorial Trophy voting is that he’s a facilitator on arguably the best 1st line in the NHL, dishing out 45 assists and helping Mikko Rantanen (66 pts) and Gabriel Landeskog (52 pts) have successful seasons yet again.

Mackinnon is out for Wednesday’s season opener however due to a positive COVID test. Can Colorado’s #1 scoring offense (3.5 goals/game) from a year be the same without their driver – especially going up against Fleury?

Toews, Kane, Debrincat, as well as young players with upside such as Dylan Strome and Kirby Dach, present a pretty tough match for Colorado especially as they try to move on from Grubauer in net. The team signed Darcy Kuemper from Arizona and he’s got upside with a 2.60 career GAA, he’s also missed a lot of time the last two seasons with various injuries.

Who will win this NHL match on Wednesday:

Kuemper spent 3-1/2 seasons in Arizona where it usually didn’t matter if you won or lost every night and now he’s got to take over main goaltending duties for the Stanley Cup favorites. That can be a lot of pressure, and the Avs without Mackinnon up against Fleury is a tough matchup.