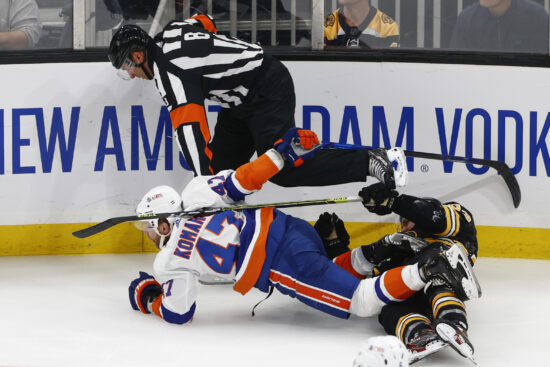 The Boston Bruins find themselves -135 favorites with their season on the line in a game 6 matchup with the New York Islanders (+115). NYI took a 3-2 series lead as they held on for a 5-4 win at TD Garden on Monday night. There’s definitely value on the Islanders on Wednesday night, as they were 21-4-3 at Nassau Coliseum during the regular season. The Bruins are also dangerous in a do-or-die situation though.

Bruins Too Banged Up to Go On?

The power play has been a big theme in this series, with Boston coach Bruce Cassidy chalking up a $25,000 fine after criticizing officiating following the game 5 loss. Three of the Islanders goals on Monday came via the power play, and Boston seems to be struggling without key defensemen Brandon Carlo (upper body) and Kevan Miller (head) who both remain out.

There are also some questions about the health of Tuukka Rask. The veteran goaltender is questionable with an undisclosed injury, and was benched for the 3rd period on Monday after allowing 4 goals on just 16 shots. Rask has the ability to be solid though, giving up just 3 scores total in two games prior on 61 shots.

So with all the issues facing Boston and the fact that they’re on the road – why are the Bruins even favored? They do have the #2 scorer in the playoffs in David Pastrnak, while Brad Marchand has scored 3 goals in the last 4 games. Is the fact that their season is on the line enough to make Boston the pick?

New York is in a great spot with two chances to advance and the first one coming at home where they scored points in 24 of 28 games during the regular season. The Islanders dominated game 4 (4-1) on their own ice as +126 underdogs, and have the momentum for a similar result on Wednesday.

The Islanders have either won or gone to OT in four straight games in this series, giving them huge value at +115. 12,000 fans were in attendance Saturday at Nassau Coliseum, and they’ll be even more rowdy with the chance of advancing to the semifinals on the line. Barry Trotz does not want to go back to Boston for a game 7.

Semyon Varlamov definitely got an edge playing in front of the home crowd over the weekend, stopping 28 of 29 Boston shots. The Islanders goaltender did give up 4 goals on Monday, but that was while facing a whopping 44 SOG which is still a .909 save percentage.

Who wins the Bruins vs Islanders game tonight:

The NHL (and NBC Sports) loves a game 7, but the Bruins will have to get a tough road win to force the decisive contest. With Rask possibly being injured, and Boston also without two key penalty killers the Islanders are in a great spot.