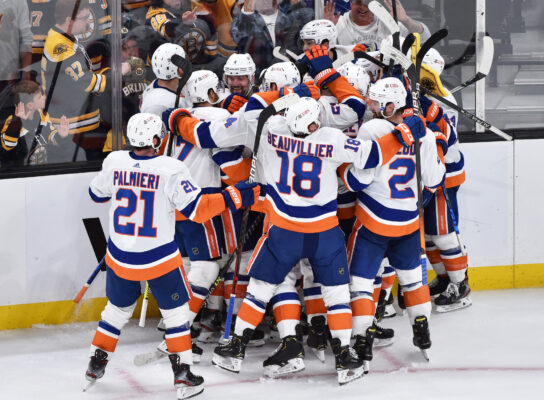 The New York Islanders were able to steal home-ice advantage in the East Division finals after a 4-3 OT win over the Boston Bruins on Monday. That’s a huge feat because NYI was 21-4-3 at Nassau Coliseum this season, one of the best home records in the NHL. Boston will try to get back on top in the series and are -140 favorites to do just that.

The game 2 loss was disappointing for the Bruins, but they can take some solace in battling back from a 3-1 deficit to at least force OT. Boston tallied a couple scores within five minutes of each other in the 3rd period before Casey Cizikas ended things at 14:48 in overtime to give the Islanders the win.

Boston dominated game one behind a hat trick from David Pastrnak, while Patrice Bergeron and Brad Marchand continued to stay hot with goals in game two. Pastrnak is the 4th leading scorer of the postseason, giving the Bruins some value as the Islanders are somewhat in limbo in their goaltending situation.

The Bruins aren’t 100% in net either though, as veteran Tuukka Rask was seen wincing at times on Monday. Rask is on the injury report with an undisclosed ailment, but is almost a guarantee to start. Rask allowed 4 goals on 39 shots in game 2, but had held opponents to 2 goals or less in four prior this postseason.

Islanders Turn It Up at Home

New York was able to tally a 5-3 win over Pittsburgh at home in game 6 to win their first round series. There were 9,000 fans in attendance at that contest, but the capacity is expected to be raised to 12,000 for Thursday’s game 3. The Islanders scored points in 24 of 28 home games this season, does an increase in fans give them value at +120?

The Islanders had power play goals by Josh Bailey and Jean Gabriel Pageau to fuel Monday’s 4-3 OT win. One would think if the Bruins can limit the mistakes and play better while shorthanded they’d have a great chance to regain the series advantage, as Boston had the #3 penalty kill during the regular season.

Pageau and Anthony Beauvillier are both in the top 10 in scoring this postseason, so the Islanders’ #21 scoring offense has played better than expected. The big question for game 3 comes in net, where Ilya Sorokin was scratched for Semyon Varlamov on Monday. Does New York go back to the rookie who led them to three straight wins over Pittsburgh in the first round, or stick with Varlamov who powered the game 2 win?

Who wins the Bruins vs Islanders game tonight:

Boston had a great chance to go up 2-0 in the series after rallying back on Monday, but how much will blowing that opportunity alter their momentum. With the Islanders an underdog, you pay to see how well they’ll play at home after such a successful regular season at Nassau.