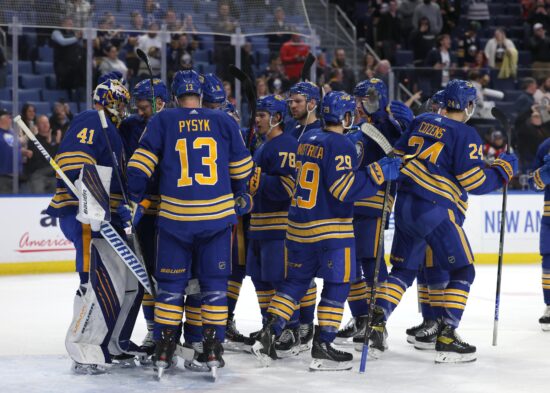 The Buffalo Sabres have started the new NHL campaign in excellent form, but they remain +10000 chances to win the Eastern Conference this season. However, they come up against one of the standout chances this week in the Boston Bruins.

Sabres Among Leaders In Eastern Conference

It has been a surprising start to the NHL season for the Buffalo Sabres, as they have a perfect 3-0 record after three games of the season have been completed. They have the best defensive record in the Eastern Conference at this early stage, having allowed just four goals in the games that they have played. The Sabres have also scored 12 goals, meaning that they are averaging four per game at present. Their most recent victory was a 5-2 success against the Vancouver Canucks on Tuesday evening.

That home success was a fine showing from the Sabres, as they scored three in the final period to make sure of the win. Zemgus Girgensons, Kyle Okposo and Rasmus Asplund were all on the scoresheet. Meanwhile, Tage Thompson and Jeff Skinner also hit the net in the win. Goaltender Craig Anderson continued his excellent start to the season, making 32 saves from 34 shots to average .941.

Bruins Towards Foot Of Atlantic Division

It has been a slow start to the NHL season for the Boston Bruins. However, they will remain among the leading contenders for the conference this season, and are still readily found at around +1400 to win the Stanley Cup this term. Boston have scored six times this season in the two games that they have played, but have allowed seven. Six of the goals that they have allowed came in a recent drubbing at the hands of the Philadelphia Flyers on Wednesday night.

The Bruins were eventually seen off in that game, despite going into the final period tied at 3-3. Philadelphia scored three unanswered goals in the final period to make sure of the win. The Bruins goals in that defeat were scored by Taylor Hall, Karson Kuhlman, and Brad Marchand. Meanwhile, Jeremy Swayman in the Bruins goal averaged just .792, allowing five goals from 24 shots.

In the last 85 games between the Bruins and Sabres, Boston have won 51 times, while Buffalo have picked up 34 wins. This will be the ninth game between the teams in 2021, with the Bruins having won eight times. The only win for the Sabres came in a 6-4 success at home in April.

Buffalo have had an excellent start to the season in the NHL, but a first defeat could be inflicted this week. The head-to-head record makes for grim reading, and Boston could begin to find their feet with a success on the road.