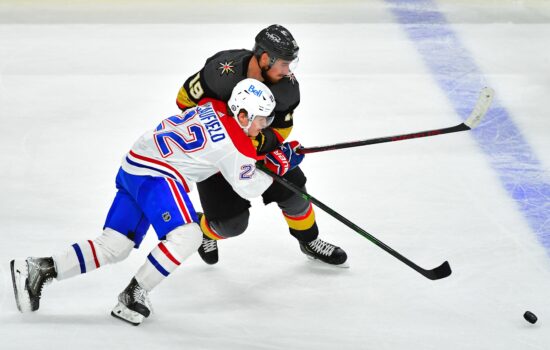 The Montreal Canadiens hope that they worked out some kinks heading into game 2 of their semifinal series with the Vegas Golden Knights. The Knights took a 1-0 series lead following a dominating 4-1 victory on Monday. A raucous crowd of nearly 18,000 gave Vegas a huge advantage, something which should be apparent again on Wednesday with the home team being a huge -263 favorite.

Can the Canadiens Settle Down?

A huge loss in game 1 was almost expected for Montreal despite the fact they came into the contest riding a 7-game win streak. Dominique Ducharme’s team was also playing for the first time in a week after the sweep of the Jets, and was used to playing in front of 2500 people in Canada – not almost 18,000.

Does Montreal have value now that they’ve got a game under their belt in front of the crowd and after a long layoff? The Canadiens are huge underdogs at +230, but they’re also used to playing with a chip on their shoulder after coming back from a 3-1 series deficit against top-seeded Toronto in the 1st round. Getting to Vegas goaltender Marc-Andre Fleury is going to be an issue though.

Canadiens goaltender Carey Price also needs a bounce-back game after allowing 4 goals on 30 shots in the opener. It was the most goals Price has allowed in the last 10 postseason contests, and was one more than he had allowed in the past three combined.

Vegas In a Groove

The Golden Knights looked dominant on Monday, with the 4-1 victory being their 5th straight of the postseason. Even when Montreal tightened things 2-1 on a Cole Caufield goal in the 2nd period, Vegas struck back just 53 seconds later when Mattias Janmark slipped one past Price to give the Golden Knights a 3-1 lead that they wouldn’t look back on.

The full capacity crowd at T-Mobile Arena was definitely an advantage for the Golden Knights in game 1. Even though Montreal will be more comfortable and adjusted to playing in front of that many fans for Wednesday’s matchup, it may not matter as the Golden Knights were 21-5-2 on their own ice this season.

Another thing that might not make a difference with the Canadiens’ adjustments is that they have to go up against Fleury, who looks like a Stanley Cup-winning goaltender right now. The veteran stopped 28 of 29 Montreal shots in game 1, with the Canadiens’ lone goal coming on a power play. This is after Fleury held the high-powered Colorado offense to 2 goals or less in 3 of the final 4 games last series.

Who wins this Canadiens at Golden Knights game tonight:

Why go against Vegas in this one? For as rusty as Montreal looked on Monday after a week off, the Golden Knights were also coming off an extended 3-day break. Montreal may steal one or even two at home, but it’s going to be hard to ever get home ice back in Las Vegas.