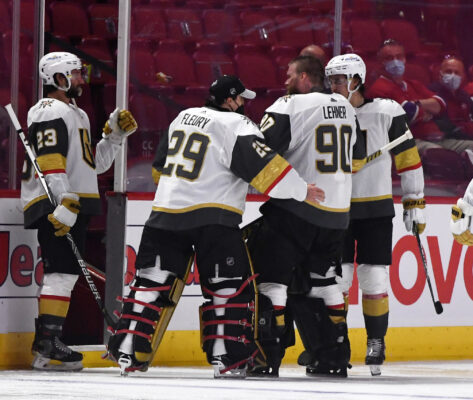 The NHL Semifinals series between the Montreal Canadiens and Vegas Golden Knights shifts back to Sin City tied up 2-2. Being tied against the Knights might seem like a moral victory for the Habs, but they let one get away in a 2-1 home OT loss on Sunday. Vegas has been favored in every game so far this series, something that doesn’t change with the huge VGK -239 line for game 5.

The Canadiens are big underdogs this series, but have shown they aren’t going down without a fight after battling to a 2-2 tie so far through four games. The Habs won games 2 and 3, and had their chances on Sunday before falling 2-1 just 1:18 into OT.

Montreal had their chances to come back to Vegas with a 3-1 lead, but now they have to go in front of 18,000+ at the rowdy T-Mobile Arena. The Canadiens do have a road win in this series, taking game 2 by the score of 3-2 as +209 underdogs. Montreal is +210 on Tuesday night.

There are some goaltending issues on the other side of the ice, but Montreal knows who their man in net is 100%. Carey Price took the OTL on Sunday despite allowing just 2 goals for the third straight time this series. Price would tell you game 4 was a bad performance after he faced just 21 shots, stopping 72 of 76 shots in games 2 and 3.

Who Is In Net for Vegas?

Despite the loss, it could be argued that Montreal played the better game on Sunday. The Habs held a 1-0 lead into the 3rd period but it was the performance of spot starter Robin Lehner that was the difference. Lehner stopped 27 of 28 shots to help Vegas regain home ice advantage heading back to T-Mobile Arena.

It was just the 2nd start this postseason for Lehner, and the first since giving up 7 goals on 37 SOG to Colorado three weeks ago. Montreal wasn’t able to take advantage of a rusty Lehner, managing just a Paul Byron score at 18:55 in the 2nd period. The Canadiens were without head coach Dominique Ducharme after a positive COVID test, but that’s not an excuse as he also missed the 3-2 Habs win in game 3.

The big question heading into game 5 is who goes in net for the Golden Knights. It seems kind of disrespectful to keep Marc-Andre Fleury on the bench after he has led Vegas this far starting all but one postseason game prior to Sunday’s win. Fleury allowed 3 goals in three of his last four starts though – and Lehner was the key to Sunday’s win. Tough call for Peter DeBoer.

Who wins this Canadiens vs Golden Knights game tonight:

Regardless of who goes in net, Vegas should have an edge here. Fleury will benefit from being rested and taking a step back for a minute, while Lehner is playing angry and wants to keep the starting spot if he gets the opportunity. There’s no value on the Vegas ML, but at the very least this should be low scoring.