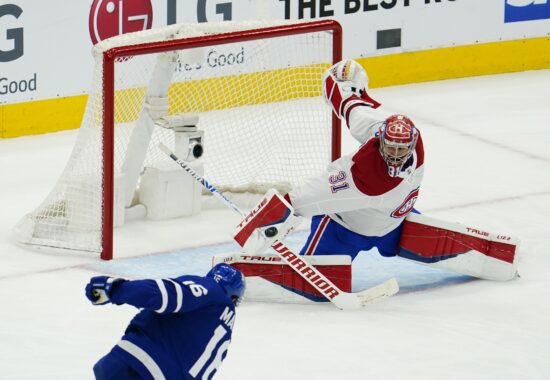 The two oldest NHL teams meet in the playoffs for the first time in 42 years. Toronto Maple Leafs entered the postseason as one of the main favorites for the 2021 Stanley Cup. They are still favored to win the series with the Canadiens, even though things didn’t go their way in Game 1. The Leafs have a chance to set things straight tonight. If they win, it’s going to be their seventh win against the Canadiens in 2021.

Toronto Looking for a Win Before the Series Moves to Montreal

The first two games of the Canadiens vs. Maple Leafs are played in Toronto. Although there are no fans in the stands of Scotiabank Arena, the Maple Leafs probably feel more comfortable playing on home turf.

There haven’t been any fans in Scotiabank Arena since March 10, 2020, just a day before the WHO (World Health Organization) officially declared COVID a global pandemic. Nevertheless, they did very well at home in the regular season – the Leafs won 39 points in 28 home games (18-7-3).

They did lose in their first game in the postseason, which gives them additional incentive to win tonight. Winning in Toronto would make their job much easier, considering that the series then moves to Montreal, where the Canadiens could have up to 2,500 fans in the stands to cheer them on.

No Tavares in Toronto Roster After Game 1 Injury

The Leafs captain John Tavares ended up in hospital after suffering a head injury in Game 1.

It happened in the first period, when Ben Chiarot hit Tavares, sending him straight onto Corey Perry’s path, whose knee hit the Toronto forward in the head. Tavares was rushed to hospital, leaving his teammates wondering whether he’s okay.

Obviously, with their captain suffering a horrible injury, the Leafs weren’t very focused on the game, which could explain why they ended up losing.

Les Canadiens Hope They Could Cause a Sensation

They finished the regular season in fourth place in the North Division with a 24-21-11 record and a score difference of 159-168. Furthermore, they lost five straight games before heading to the postseason.

Knowing all this, it’s no surprise that they entered the Canadiens vs. Maple Leafs as underdogs. However, they surprised everyone by getting a win in Game 1. Can they do it again?

They were surprisingly good in that game, both defensively and offensively. They managed to stop Toronto from scoring more than once, which is surprising knowing that this team scored the most goals in the North Division.

They also managed to put away two goals, with the winning goal happening when they had one skater fewer on the ice.

Who wins the Canadiens vs. Maple Leafs game tonight:

In Game 1, the Canadiens showed they could be a tough nut to crack. Still, the fact is that the Leafs have much better players, who should demonstrate their quality tonight.